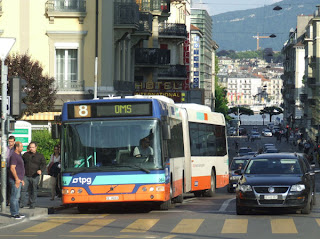 The city of Geneva lies in the French-speaking western part of Switzerland, at the western end of Lac Leman (Lake Geneva).  I visited in May 2011 and again in May 2013.

The city's public transport network is managed by TPG (their website is currently only available in French, although an English language version is due soon).  Hotels in Geneva provide their guests with tickets allowing free travel on the city’s bus, trolleybus and tram services.

A growing network of tram routes radiates out from the city centre. 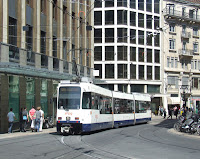 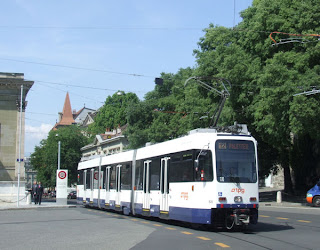 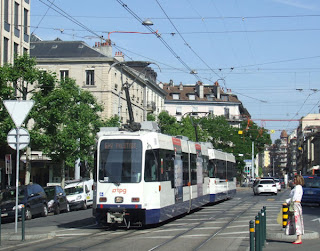 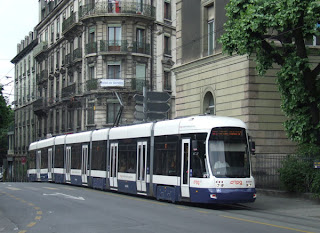 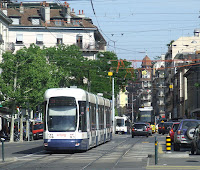 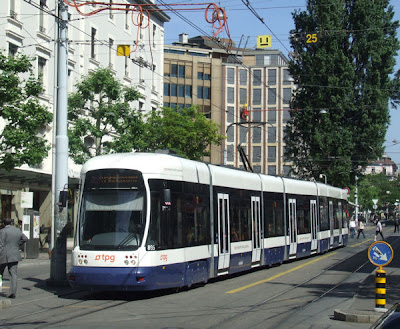 Trams are not the only electrically-powered transport, as they are complemented by trolleybuses.  The trolleybus fleet is made up entirely by articulated vehicles. 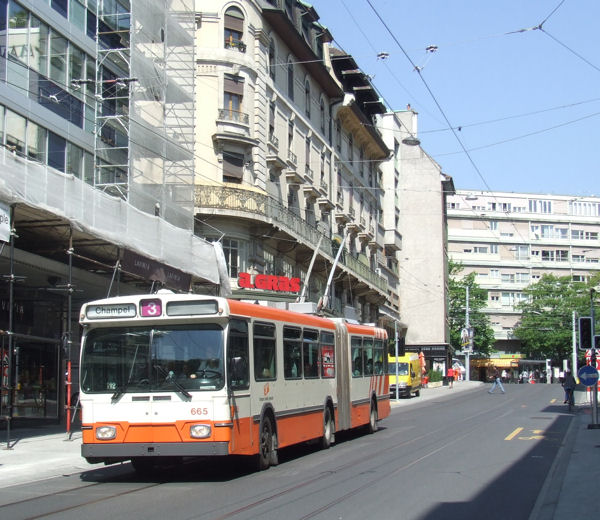 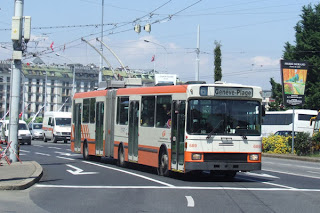 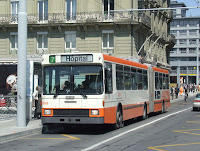 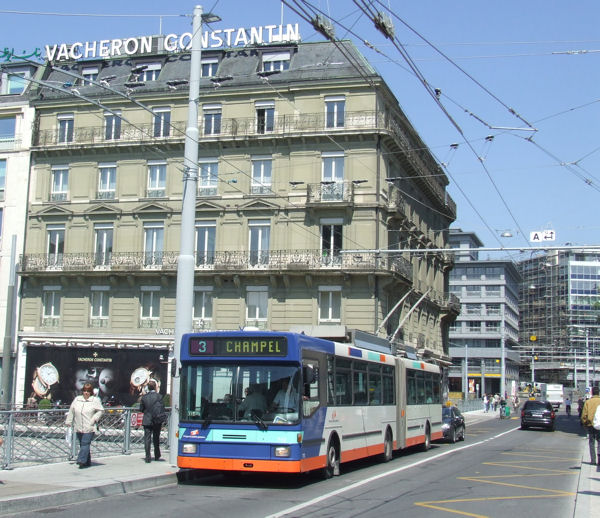 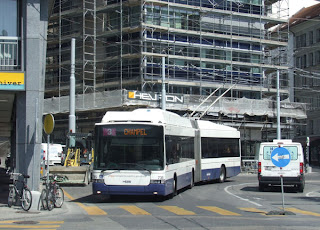 Some of the trolleybuses are bi-articulated. 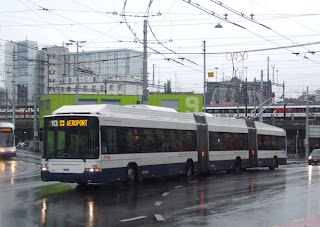 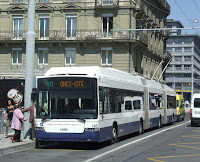 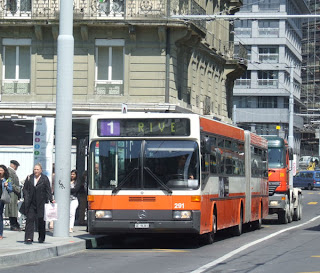 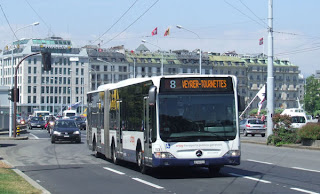 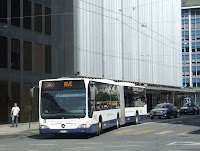 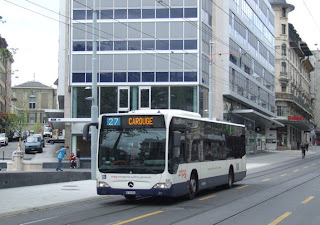 There are standard single-deckers too, but these are in the minority.


Bi-articulated diesel-powered buses are fairly unusual, operating only in a small number of cities in Europe.  Geneva is one such city.  I found them on route E, linking the city centre with Hermance at the French border on the south side of the lake.  They may only run at certain times (I noted them during peak hours and into the evening, and during the Saturday daytime). 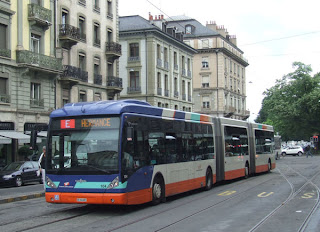 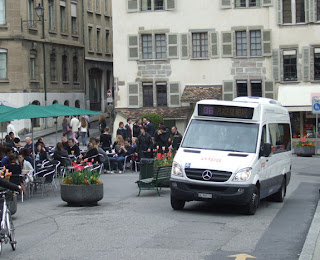 At the opposite end of the scale, the streets of the old town are served by minibus. 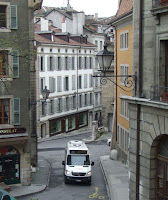 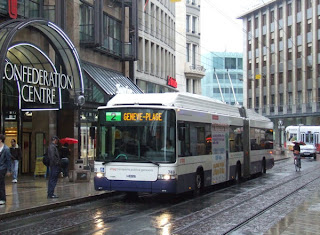 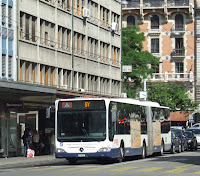 The small municipality of Gy lies a short distance from Geneva, close to the French border.  It is served by bus route A.  Thus the route and destination display comprises just 3 characters. Switzerland joined the "Schengen area" in 2008, removing passport controls at the borders with neighbouring countries.  It is not, however, part of the European Customs Union.  Customs checks can therefore still be carried out at the border. A number of Geneva's public transport routes terminate at the border with France, although a small number do cross the border.  An example of the latter is route 61, provided by a French operator, which runs into Geneva from the neighbouring French town of Annemasse.

Route 61, introduced in April 2013, provides a strategic link between Geneva's main Cornavin rail station and the station at Annemasse.  There used to be a branch line from Annemasse into Geneva, used by trains from destinations such as Evian-les-Bains.  The line terminated at Eaux-Vives station a short distance from Geneva city centre.  There was, however, no connection to Cornavin.  The branch line has now closed to allow a connection to be built to Cornavin, a project known as CEVA (Cornavin - Eaux-Vives - Annemasse).  More about this project, in French language only, can be found on the CEVA website. 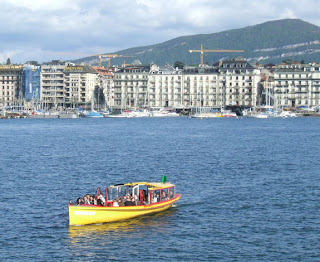 Geneva's street-based public transport system is complemented by four ferries which shuttle between piers on the lake. 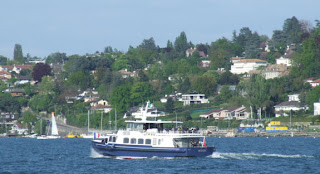 The lake is also host to ferry services to communities on its banks both on the north (Swiss) side and the south (in France).


A number of vintage paddle steamers still operate, catering to the tourist market.  This vessel, the S/S Savoie, was built in 1914. 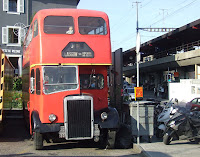 I did find one double-deck bus in Geneva, but it isn't native to Switzerland nor is it in passenger service.  In fact, it looked as though it hadn’t moved from its spot behind Cornavin rail station for some considerable time.

The excellent unofficial TPG website covers the Geneva transport system in much greater detail, although in French only.