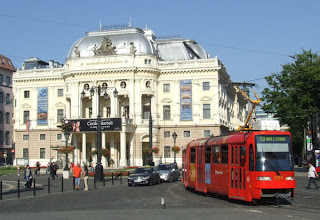 Bratislava is one of the world's more recent capitals, gaining capital city status at the end of 1992 when Czechoslovakia was formally divided into two independent states, the Czech Republic and Slovakia.  It is the second of four capital cities through which the Danube flows on its journey from the Black Forest to the Black Sea.

The transport authority for Bratislava is DpB (Dopravný podnik Bratislava).

Sometimes referring to itself as "the little big city", Bratislava's historic centre is compact and full of charm.  It is largely free of general traffic although trams operate along several of the city centre streets.

The tram fleet is made up entirely by high-floor vehicles.  Some were built in the 1990s: 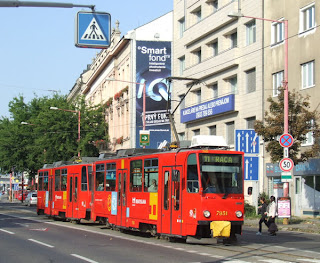 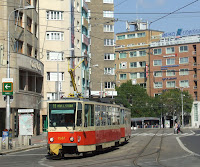 The rest are older, dating from the Communist era: 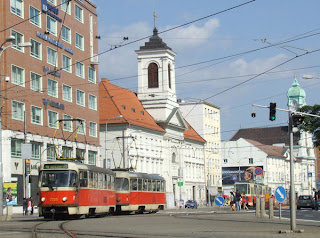 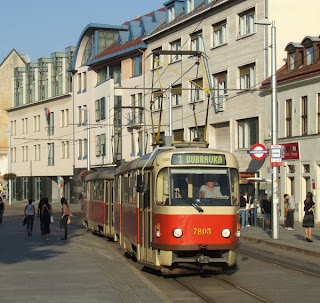 The "Underground" sign next to the tram stop flag in this image caught my eye!

Some of the Communist-era trams have been modernised: 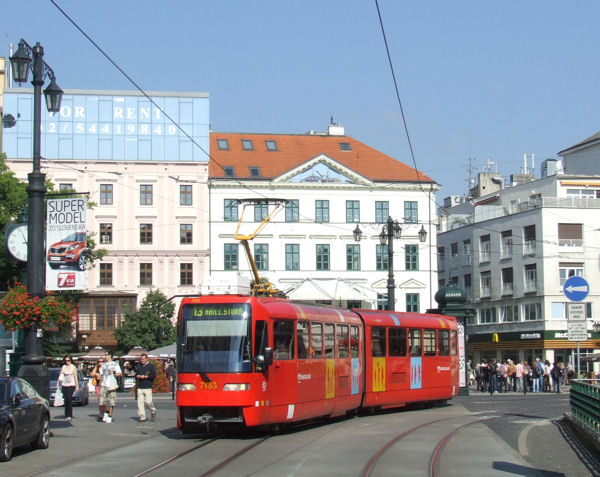 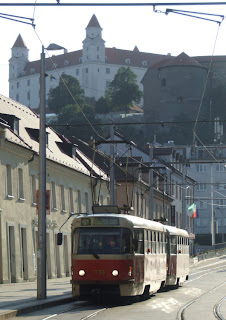 Bratislava castle sits atop a hill, with good views over the city and the river.  A tram tunnel passes through the hill, deep beneath the castle.  Despite being modernised in 2009-10, the tunnel was closed for a time from late 2011, apparently due to water ingress, but had reopened by the time of my most recent visit in August 2013. 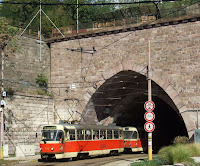 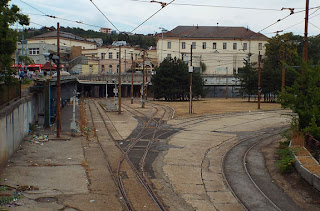 Also closed in 2011, due to the poor condition of the infrastructure, was the tram route to Hlavná (Bratislava's main railway station).  It remained closed at the time of this image in August 2013. 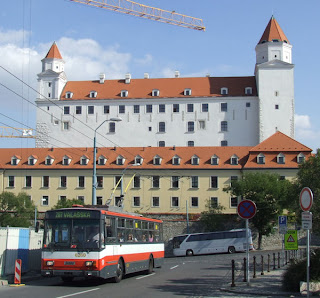 The tram network doesn't climb the steep hill to the castle entrance.  These streets are served by two of Bratislava's small network of trolleybus routes. 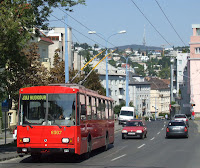 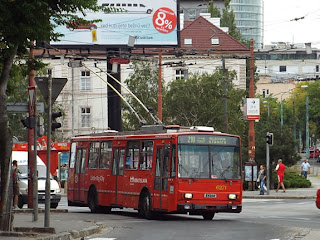 The trolleybus fleet comprises both standard vehicles with three doors... 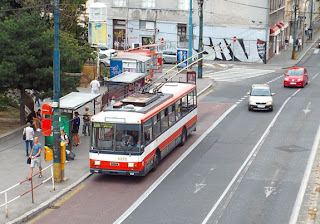 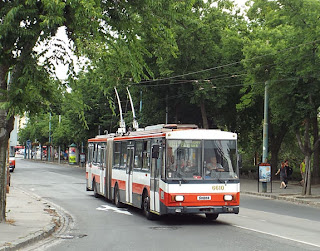 ... and articulated vehicles with four. 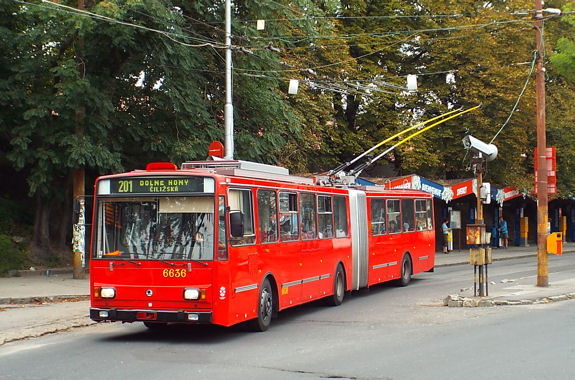 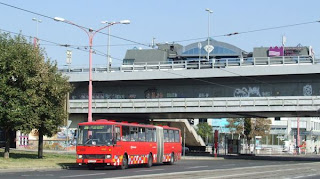 There is an extensive network of bus services in Bratislava.  The diesel bus fleet contains a mix of standard and articulated buses of varying ages.

Many carry the latest all-red livery, although some buses are still in an earlier white and red colour scheme. 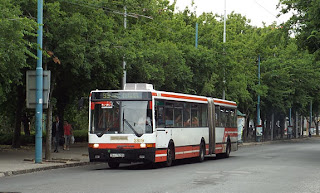 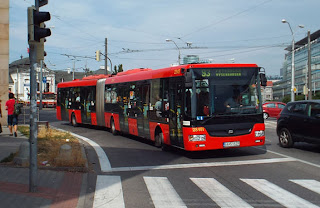 While some of the articulated buses have four doors, others have five.

In the various places I have visited, most of the articulated buses I have seen have three axles.  In Bratislava, however, some of the artics have a fourth axle. 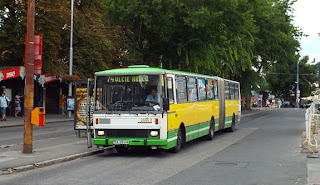 Despite dating from the early 1990s, this vehicle is one of a number converted to CNG power.

Some (but not all) of Bratislava's CNG-powered buses carry this special green and yellow livery. 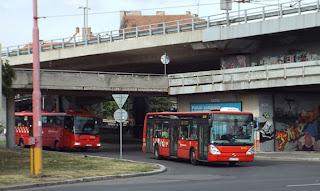 Of the standard single-deckers which I observed, all had three doors. 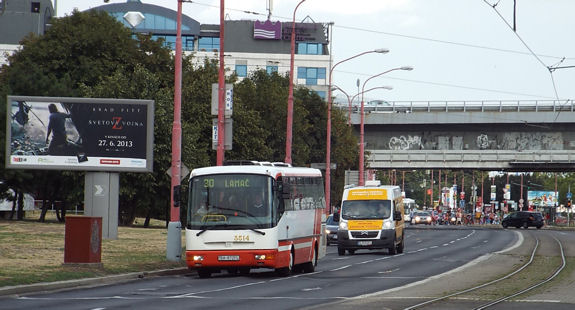 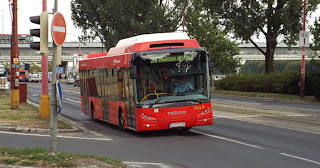 These vehicles (right and below) are CNG-powered, but carry the standard red livery rather than green and yellow. 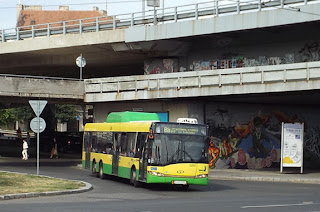 A small number of three-axle single-deck buses are operated.  These CNG-powered vehicles are in the green and yellow livery. 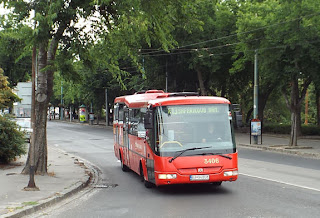 Tram line 13 used to link the city centre with Hlavná, the central railway station.  Since the suspension of the tram service to the station, a dedicated link has been provided by bus route X13. 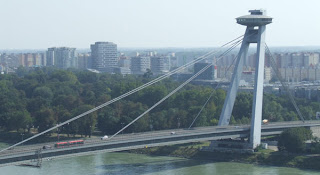 To the south side of the Danube lies a huge housing scheme, Petržalka, which was developed from the 1970s.  There are several road bridges connecting Petržalka with the city centre, including the distinctive Nový Most (new bridge) which opened in 1972.

Transport across the river to Petržalka is provided entirely by diesel-powered buses, with a frequent network of routes.  Neither trams nor trolleybuses cross the Danube in Bratislava. 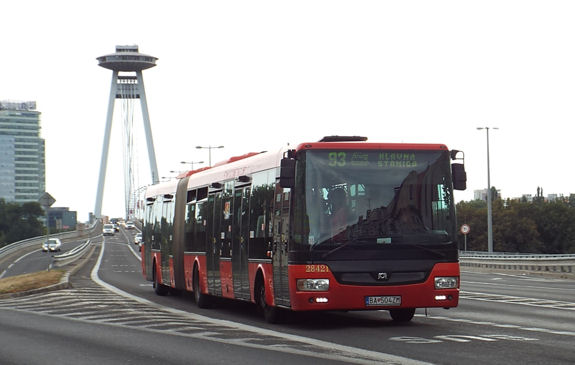 Ticketing on the bus, trolleybus and tram network is entirely pay-before-you-board.  Tickets valid for 15 minutes or 1 hour (extended to 90 minutes at weekends) are sold at roadside machines at bus, trolleybus and tram stops and must be validated on boarding the vehicle.  15-minute tickets are valid for one ride only, but 60-minute tickets allow transfers onto other vehicles, useful for journeys where there is no direct service.  Drivers do not generally check tickets, but roving inspectors do with on-the-spot fines for anyone with no ticket or an incorrectly-validated one.  More information about the ticketing system is on DpB's website. 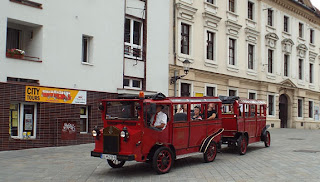 For tourists, a road train provides sightseeing tours of the old city and castle. 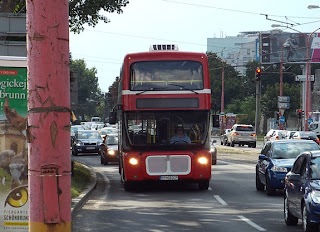 However, during my 2013 visit to Bratislava, the road train wasn't the only tour of the city.  DpB were evaluating a double-decker, using it on a free tour of the city centre to gauge passenger reaction.

A video report by Radio Slovakia International is available on YouTube.

Just 35 miles (around 55km) lie between Bratislava and the Austrian capital, Vienna.  This is surely the shortest distance between any two of the world's capitals.  Regular train services operate between the two capitals, with trains running every hour services from both Hlavná (central station, a short distance north of the city centre) and Petržalka to and from Vienna (the service to/from Petržalka is less frequent on Sundays).  Fares are cheap and, when travelling from Vienna, some types of train ticket may include free use of the public transport system in Bratislava on the first day of validity.  Check before you travel!

There is also a regular coach service between the two capitals, provided by Slovak Lines.  A further alternative is a boat service along the Danube, operated by Twin City Liner - in this image, the last boat of the day is setting sail from Bratislava on its (short!) journey to the Austrian capital: