The historic town of Quimper is located in the region of Bretagne (Brittany), in north west France.  The town is generally regarded as the heart of Breton culture.

Quimper has a population of roughly 65,000 people.  Its local public transport system comprises a network of bus routes.  These are provided by QUB.

I visited Quimper one Saturday in June 2018.  A network of ten bus routes was operating within the town.  All ten routes converged at Rue du Parc and Place de la Résistance.  I found single-deck buses in use on these services. 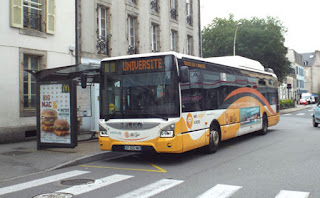 Buses used on urban services within Quimper had three sets of doors.

Routes 1 and 5 were the two core routes, operating about every 12 minutes.  Buses used on these routes were carrying a dedicated livery of white with dark yellow and orange. 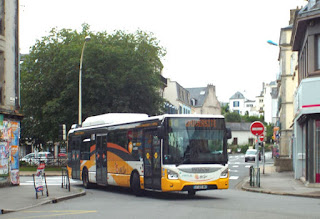 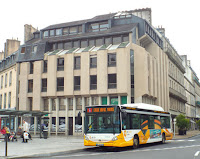 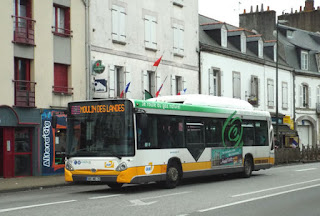 Other services operate less frequently.  Buses on these services had green flashes on their livery.  Most if not all proclaimed that they are powered by natural gas. 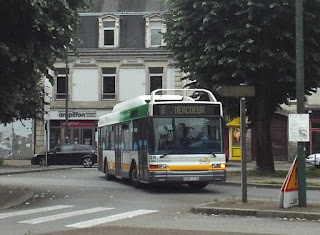 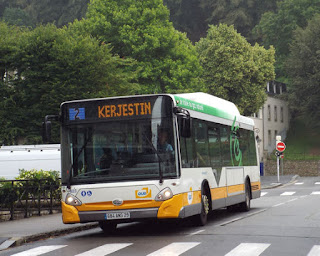 A different, more limited network operates on Sundays.  There are three routes, which are lettered (A, B, and C) rather than numbered.  These operate every 45 minutes from early afternoon until mid-evening only.

In addition to the urban services, QUB also operate a number of services to the villages surrounding Quimper, as well as to the local airport.  On some of these services, some journeys operate only if booked in advance. 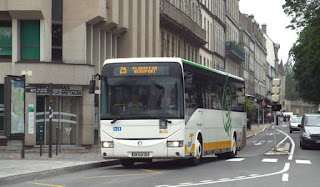 These routes were being operated mostly by high-floor vehicles with two sets of doors.

These also carry the green flash at roof level, but do not appear to be powered by natural gas. 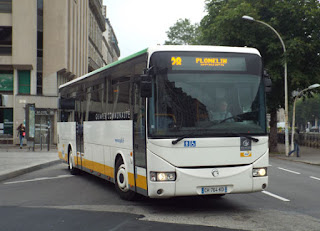 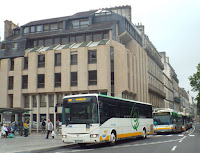 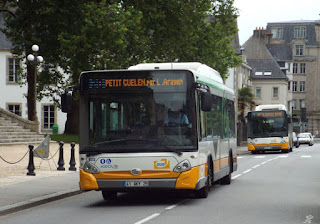 Although most of the services to the surrounding villages were operated by high-floor vehicles, I did notice one low-floor bus operating. Fares on the QUB network are simple.

From 1st July 2018, a single journey will cost €1.40, with interchange permitted for up to an hour.  Single journey tickets are bought from the driver when boarding the bus.  Ten-journey tickets are available for €11.90, these can be bought from QUB ticket agents.  There is also a "Formule Liberté" card which can be bought from the QUB office in the centre of Quimper.  This allows "pay-as-you-go" travel for €1.10 per journey (including interchanges).  A group ticket for groups of 10 or more people travelling together is also available.

An all-day ticket allowing unlimited travel is available for €4.  These are sold at QUB ticket agents, but cannot be bought on the bus. 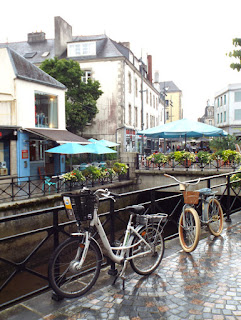 Complementing the bus network is a cycle hire scheme.  This is also provided by QUB.

Unlike many other cities, where bikes can be picked up and dropped off at docking stations, in Quimper the bikes are rented for 3, 6 or 9 months.  Renters can choose a classic or an electric bike. 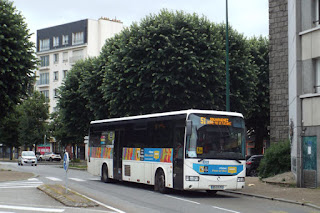 Heading further out from Quimper, to other towns and to the coast, is a network of bus services operated under the "Penn-ar-bed" banner.

I found high-floor coaches, with two sets of doors, operating these services.  Most carried a white livery with "Penn-ar-Bed" relief. 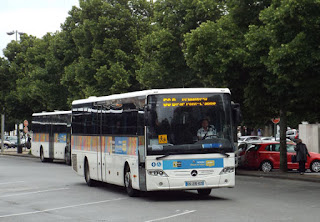 There were a couple of vehicles operating which were not carrying the Penn-ar-Bed livery. 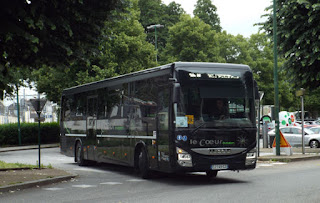 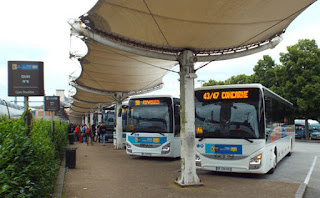 The Penn-ar-Bed services operate from a bus station alongside Quimper's railway station.

Details of these services are available from the Viaoo29 website (in French only), or from the BreizhGo site which covers the entire Bretagne region.

A fare of €2 applies to any journey on the Penn-ar-Bed network, except on the lengthy route from Quimper to Brest.  That route is split into three fare zones, with a fare of €2, €4 or €6 depending on the distance travelled.

The Penn-ar-Bed fare allows a transfer to or from the QUB network at no extra cost. 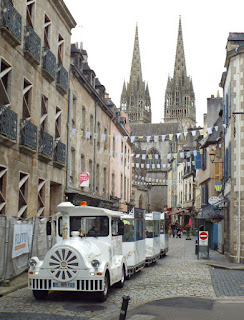 Four tourists, a road train operated by Celtic'train explores the streets of Quimper's old town from April to September.

The Celtic'train tour starts alongside the cathedral in the heart of the town. 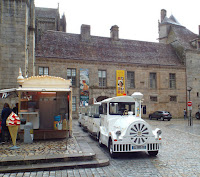 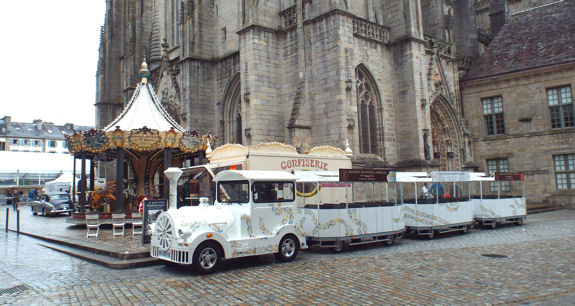 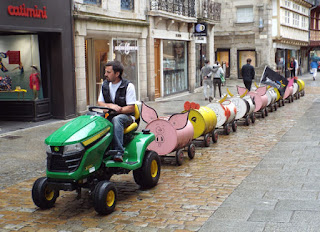 Finally, a road train of a different sort.

My visit to Quimper coincided with an agricultural display in the centre of town.  I found this tractor towing oil drums in the form of farm animals through the streets.

An electric-powered minibus shuttle will be introduced between the station and old town, operating about every 20-25 minutes.  There will also be an airport shuttle, timed to connect with flights at Quimper's airport.
No comments: