Over recent decades, trams have enjoyed a renaissance across France.  The number of cities with tram systems has grown from just three in the 1970s, to around thirty today.  However, some French cities are developing high-capacity public transport without building tram systems.  One such city is Nîmes, in southern France. 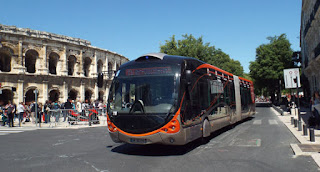 Nîmes' high-capacity transport service is referred to as the "tram'bus".  It is a bus rapid transit system which is designed to provide a tram-style service.

In this image, the tram'bus contrasts with Nîmes' well-preserved Roman amphitheatre. 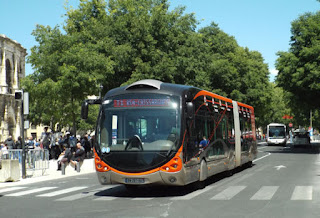 The tram'bus operates on one route, numbered T1, linking the city centre with a park-and-ride site to the south of the city. 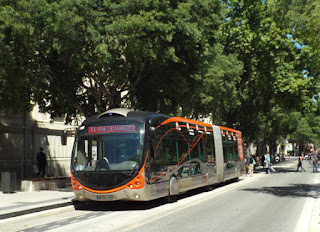 All stops served by tram'bus have been upgraded to allow step-free access from the kerb onto the vehicle.

The markings on the road form an optical guideway, monitored by a camera in the windscreen, which steers the bus.  These markings are provided at stops, so that the tram'bus can dock against the kerb with greater precision than manual steering. 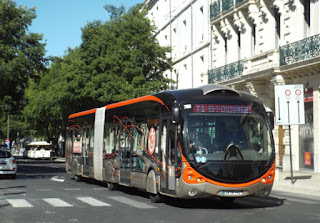 Tram'bus vehicles have four sets of doors.  Doors do not open automatically, but are operated by pressing a push button.  Passengers may board and alight through any door.

Tickets are sold from machines at each tram'bus stop, and must be validated using an on-board ticket reader.


On Mondays to Saturdays, tram'buses run at high frequency during the daytime, departing every 5 to 8 minutes.  The Sunday service operates to a less attractive frequency of generally every 35-40 minutes.

Tram'bus forms part of Nîmes' urban public transport network, provided by Tango (Transports de l'Agglomération Nîmoise).  For the English language version of the website, select "Anglais" from the drop-down menu at the foot of the Tango web page.

While the tram'bus vehicles wear a distinctive orange and beige livery, other Tango buses are white with coloured relief. 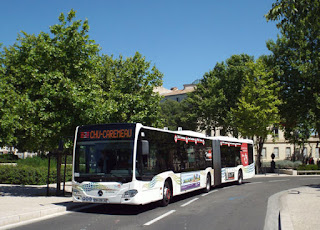 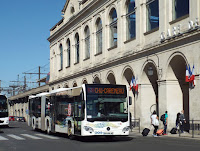 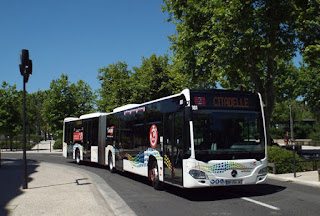 Like the tram'bus, the articulated buses have four sets of doors, which are operated by push buttons.

Passengers may board or alight through any door. 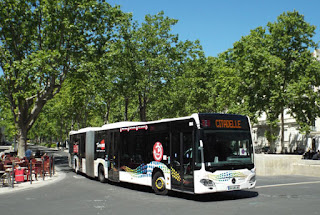 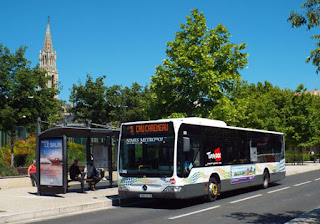 Standard single-deck buses operate on several other Tango services into the centre of Nîmes.

On these vehicles, passengers must board through the front door. 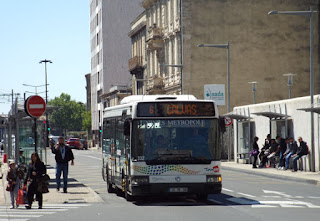 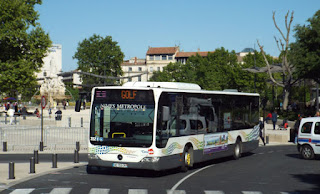 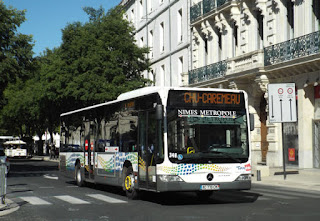 Some of the single-deckers have two sets of doors, while others have three. 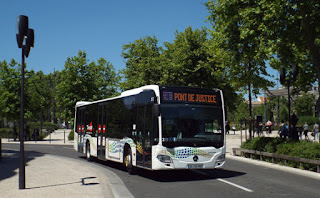 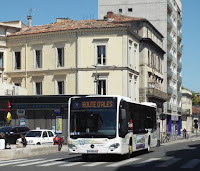 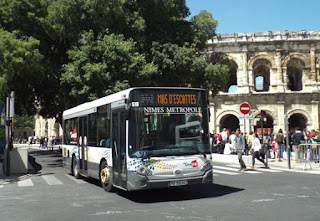 There are also some smaller single-deck buses, with two sets of doors, operating into the centre of Nîmes. 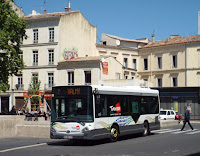 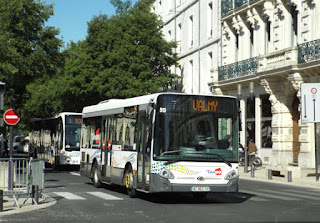 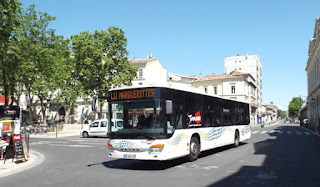 As well as the urban network, Tango also provide a number of services into the area surrounding Nîmes.

High-specification buses and coaches are used on these services. 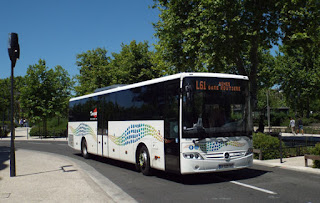 Fares on Tango services are simple.  At the time of writing, a single ticket costs €1.60, but can then be recharged for further journeys at €1.30 per journey.  A single ticket is valid for an hour throughout the Tango network, with interchanges and return journeys permitted within that time.

There are also 2-journey, 5-journey and 10-journey tickets, all offering discounts compared to buying single tickets, along with an all-day ticket allowing unlimited travel for €3.60 (€3.30 if recharging a previously-used all-day ticket).  Monthly and annual passes are also available.

As in a number of other cities I have visited, Tango services run at reduced frequencies during the peak summer holiday period. 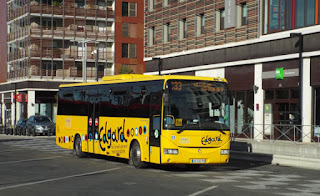 Buses heading further out of Nîmes are provided under the Edgard brand (website in French only), Gard being the name of the local authority area.

All of the vehicles I observed on the Edgard network were high-floor, step-entrance vehicles with two sets of doors.

Some were in a yellow colour scheme with prominent Edgard branding... 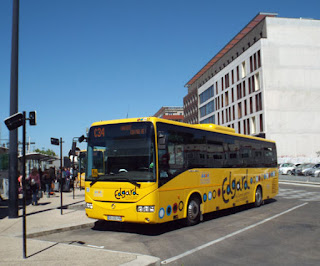 ...while others were in plain white with little or no branding. 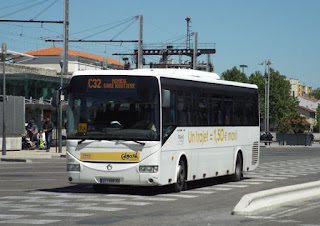 An all-day ticket, priced at €4, allows unlimited travel on both the Edgard and Tango networks.  Monthly and annual passes are also available.

Single-journey, two-journey and all-day tickets can be bought from bus drivers.  Other tickets are sold from a network of agents. 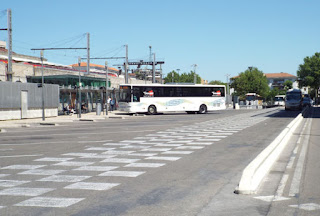 A bus station alongside the rail station is the hub for Edgard services into and out of Nîmes (and also for some of the Tango services heading out of town). 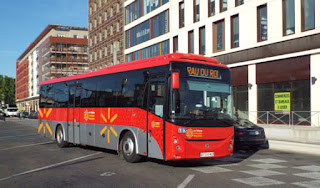 There is a railway line from Nîmes to Le Grau du Roi, a nearby town on the Mediterranean coast.  However, not all services are provided by trains.

Some departures are operated by coaches, such as this one.  Its livery is similar to that worn by the local trains. 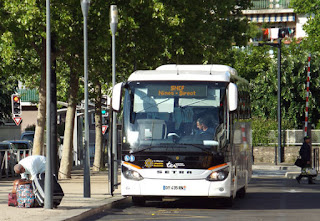 I also observed a coach in white and black colours operating a service as part of the local rail network.  The "ter" logo on the front indicates that it is operating in conjunction with the railway.

Unsurprisingly, these coaches arrive and depart from the bus station.

Rail tickets and fares apply on these coaches. 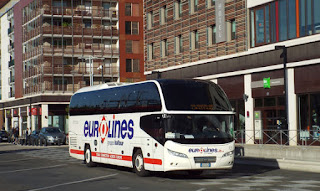 Longer-distance and international coaches call in to Nîmes.

I noted an Italian coach operating an overnight Eurolines service to Bologna. 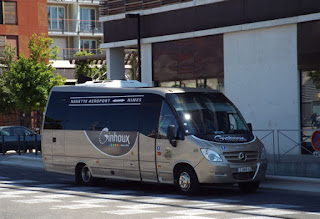 Nîmes has a small airport, although it handles only a limited number of flights.  A minibus shuttle connects the airport with the bus station, at times which connect with flights.

I found the minibus parked up in between trips. 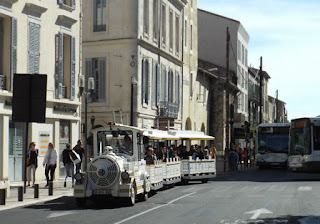 For tourists, a road train provides sightseeing tours around the historic heart of the city.

Images in this post reflect what I found during a brief visit to Nîmes, on a Saturday afternoon in May 2017.
1 comment: