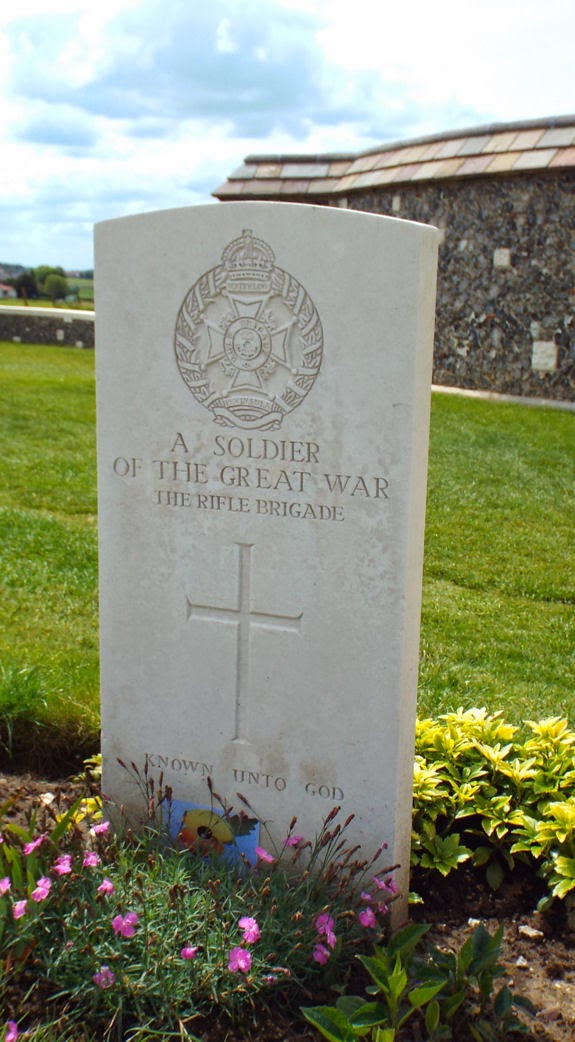 28th July 1914 was a dark day in European history.  This date, a century ago, was marked by the outbreak of war.

The Belgian town of Ieper is closely associated with the First World War.  During the war, official documents in Belgium used the French language.  So, despite being in the Flanders region, Ieper is better-known by its French name - Ypres.

Ypres lies close to the battlefields of the Western Front.  Between 1914 and 1918, at least half a million soldiers lost their lives just in those battlefields in Flanders.  Millions more were killed at Verdun and the Somme.

Large numbers of London buses went to the Western Front, having been requisitioned for use as troop carriers.  Transport for London is marking this 100th anniversary of as part of its 2014 "Year of the Bus" celebration.

But what of the buses which can be seen in Ypres (or Ieper) today? 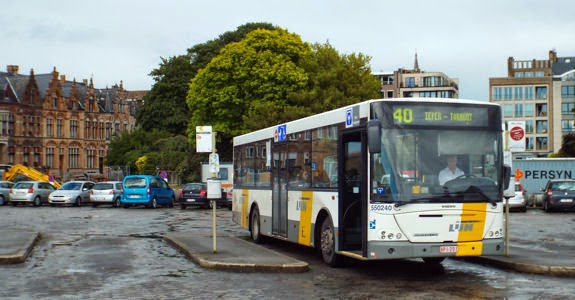 As Ieper is in Flanders, its bus services are provided by De Lijn.  The railway station is a hub at which all the bus routes converge.

As the town is relatively small, most services operate from Ieper to surrounding towns. 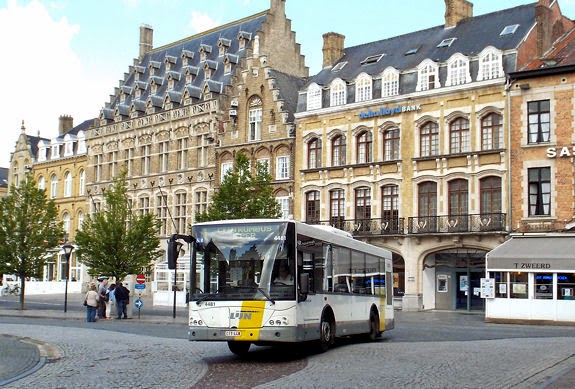 During the daytimes, most of the bus routes don't run into the historic centre of Ieper.  At these times, a connecting service runs from the station to the centre. 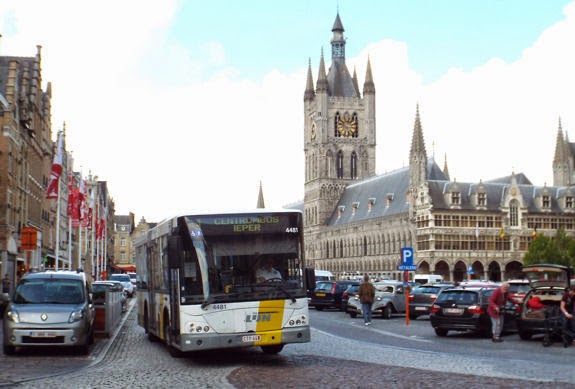 The First World War left Ieper in ruins.  The historic buildings have been restored, including the Cloth Hall (right) and Court House (below).  Both are situated on Ieper's market square. 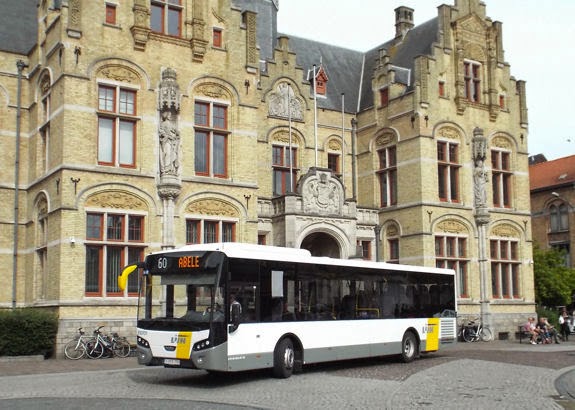 In the early mornings and from late afternoon onwards, all bus routes serve the market square.  The "Centrumbus" is not required and therefore does not operate at these times.

Route 94 serves the nearby village of Passendale, a name synonymous with the atrocities of the First World War. 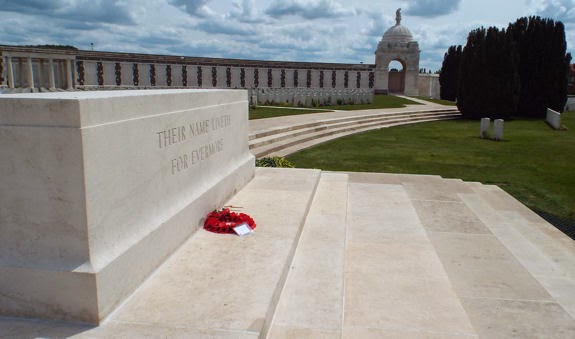 Near to Passendale is Tyne Cot Cemetery, one of the largest cemeteries commemorating the war dead.

This image does not do justice to the sheer size of the cemetery nor the loss of life which it marks. 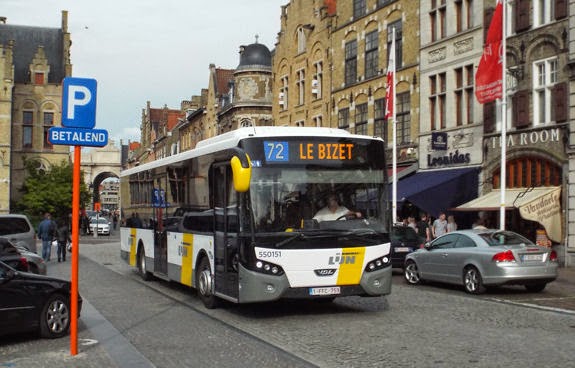 Although most of the bus routes link Ieper with other towns in Belgium's Flemish-speaking region, route 72 operates into French-speaking Wallonia.  Note the destination in French... and the Tea Room sign in English on the shop front to the right.
All the full-size buses I observed in Ieper were two-door single-deckers.  An articulated bus is scheduled to operate a few journeys into and out of Ieper, although I didn't spot it on my visit, in May 2014. 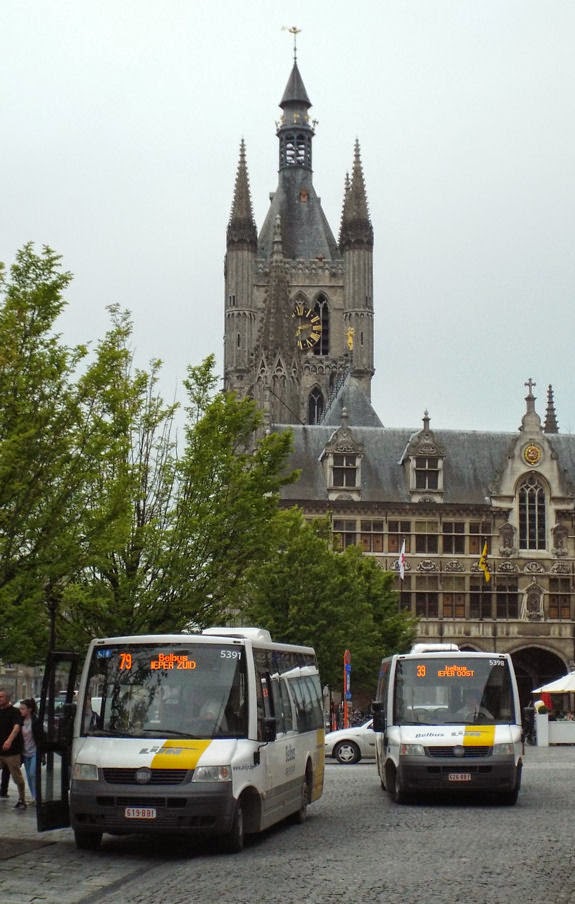 At the opposite end of the scale,  minibuses are a common enough sight in and around Ieper.  These are used on demand-responsive services, branded as "Belbus", which operate into the surrounding area. 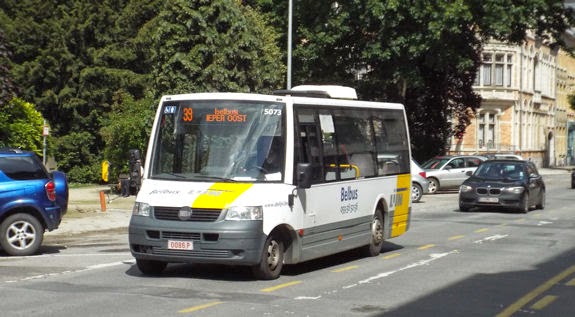 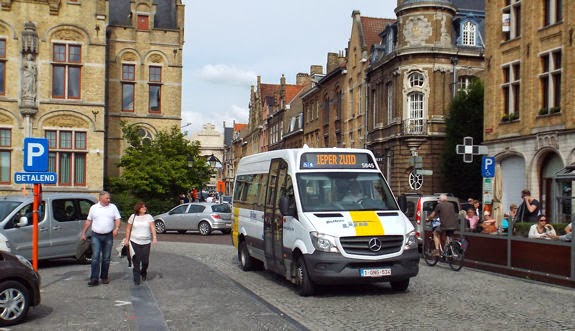 Single fares on Ieper's bus services are based on a zonal tariff system.  At the time of writing, single tickets cost €2 or €3, depending on the number of zones travelled.  Tickets can be bought from the bus driver, although they are about one-third cheaper (€1.30 or €2) if bought in advance then validated on boarding the bus.  Transfers are permitted, within a time limit.  DeLijn's website has more information about fares.

The Menin Gate is, without doubt, the most well-known landmark in Ypres. 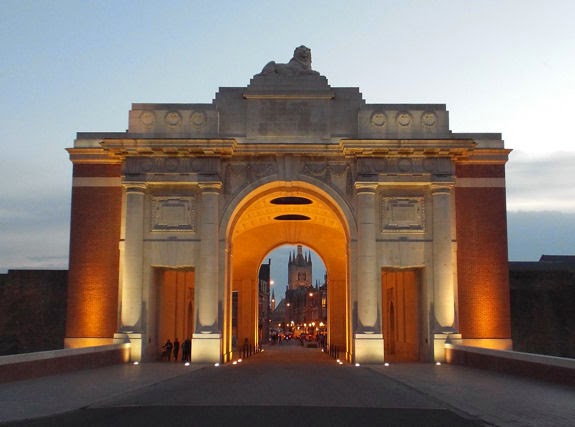 The walls are inscribed with tens of thousands of names, those of British and Commonwealth soldiers who were killed in the Flanders battlefields. The Last Post is sounded at 20:00 every evening, as a memorial to those who died.

Could anyone have foretold, on 28th July 1914, what a fateful day it would turn out to be? 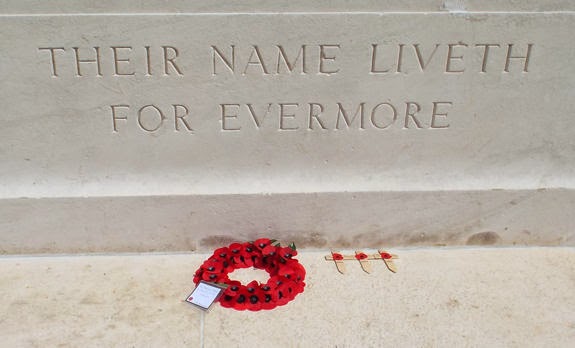