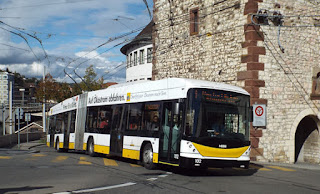 The largest systems are in Zürich and Lausanne, with networks covering around 50 kilometres of route.  The smallest is in the city of Schaffhausen, in northern Switzerland.  The trolleybus system here comprises just one route, around 9 kilometres in length. 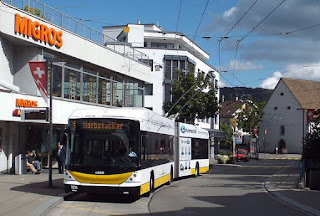 A small fleet of articulated trolleybuses is operated on line 1.  The vehicles have four sets of doors.

The trolleybus route is complemented by five bus services, numbered 3, 4, 5, 6 and 8. 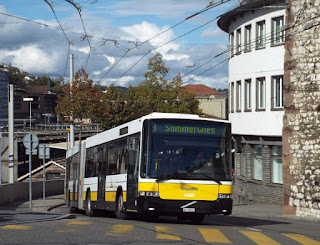 I found articulated buses operating on routes 3 and 4.  Like the trolleybuses, these vehicles have four sets of doors. 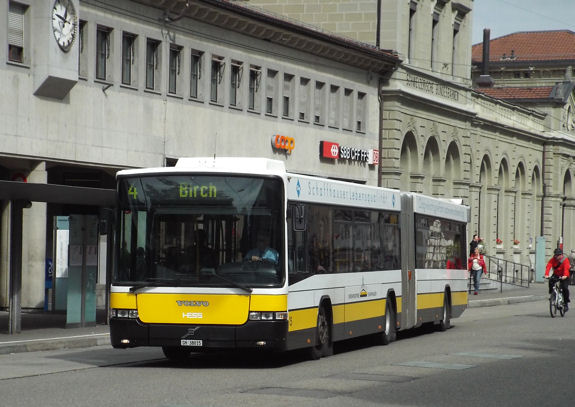 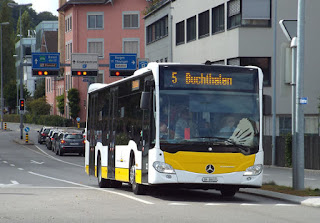 Standard single-deckers were in use on routes 5, 6 and 8.  These vehicles have three sets of doors. 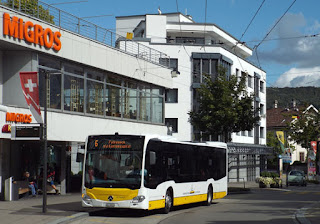 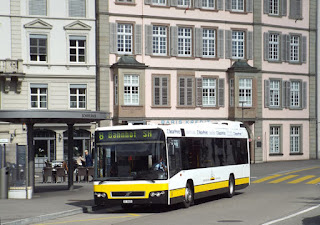 The canton (administrative district) of Schaffhausen extends beyond the city to the surrounding area to the west, north and east.  Buses linking Schaffhausen with this area are branded Schaffhausen Bus.  Five routes, numbered 21 to 25, operate into the centre of Schaffhausen.  Details of these are given on the VBSH website (in German). 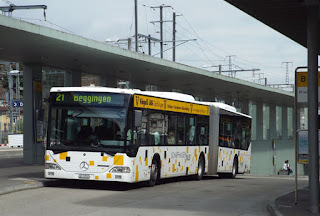 I observed articulated buses operating on route 21.  These have three sets of doors. 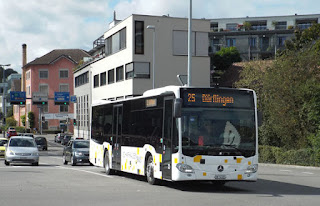 On other routes, standard single-deck buses with two sets of doors were operating. 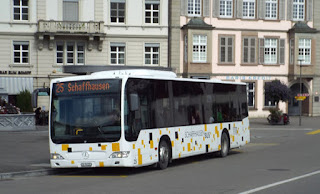 Route 25 operates twice an hour between Schaffhausen and Dörflingen, close to the German border.

One bus per hour terminates at Dörflingen, while the other continues over the border into Germany. 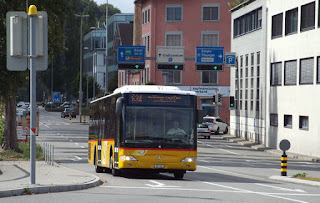 The city of Schaffhausen is situated on the north bank of the river Rhine.  The Rhine forms the border between Schaffahusen and Zürich cantons.

Bus services from Schaffhausen into Zürich canton are provided by PostAuto.  I observed these were operated with single-deck buses. 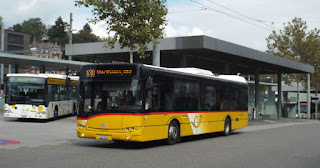 The buses have two sets of doors. 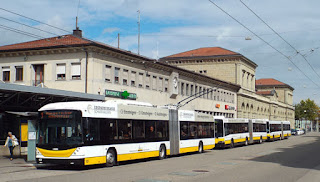 The focal point for all the bus services is outside and opposite Schaffhausen's railway station.

Flextax coordinates the fares on public transport services throughout Schaffhausen canton.  Fares and tariffs are based on a zonal system.

A single zone covers the city of Schaffhausen.  A single journey costs CHF3 at the time of writing.  A single ticket is valid for 60 minutes on any bus or local train.  Interchanges are permitted.  Six-journey tickets are available for CHF15.

All-day tickets allowing unlimited travel until 05:00 the following day are sold for CHF6.  A multi-use ticket allowing six days (which do not have to be consecutive) is available for CHF30.

On VBSH buses, and on Schaffhausen Bus' articulated buses on route 21, tickets can be bought from a machine on board the bus.  Drivers do not sell tickets on these services.  On other Schaffhausen Bus services and on PostAuto buses, tickets are sold by the driver.

Beyond the city, the fare depends on the number of zones travelled through.

Further details on fares and ticketing can be found on the Flextax website (German language only. 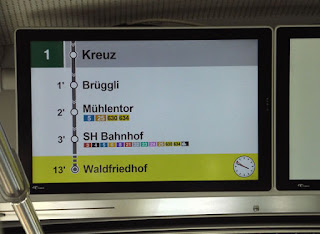 While travelling on a VBSH trolleybus, these internal information displays caught my eye.

The display shows the route number and next stop; the following three stops, the expected time to reach them and what connecting services are available; the final destination and expected journey time, along with a clock. 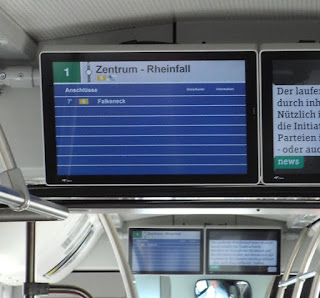 As the bus approaches a stop where interchange onto other routes is available, the display changes to list the connecting services and the expected time to wait for the next bus.

This display shows the next route 6 to Falkeneck is expected in 7 minutes. 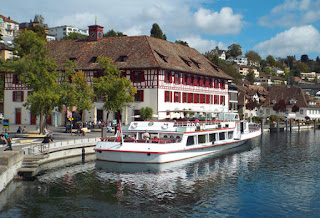 From April until October, a boat cruises along the Rhine from Schaffhausen to Konstanz and Kreuzlingen, on the shores of Bodensee (Lake Constance).  Boats generally operate 4 times per day.  They do not operate during the winter.

The boat service is operated by Untersee und Rhein. 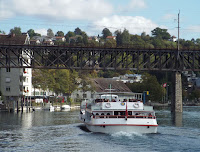 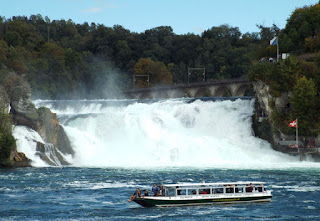 At Neuhausen am Rheinfall, a short distance from the centre of Schaffhausen, is Rheinfall (Rhine Falls).  The waterfalls are the biggest in Europe and are unsurprisingly a major tourist attraction.

Boat trips operate at the falls from March until October. 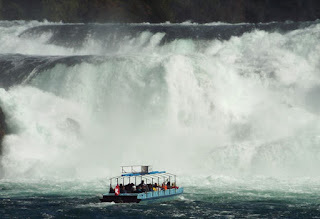 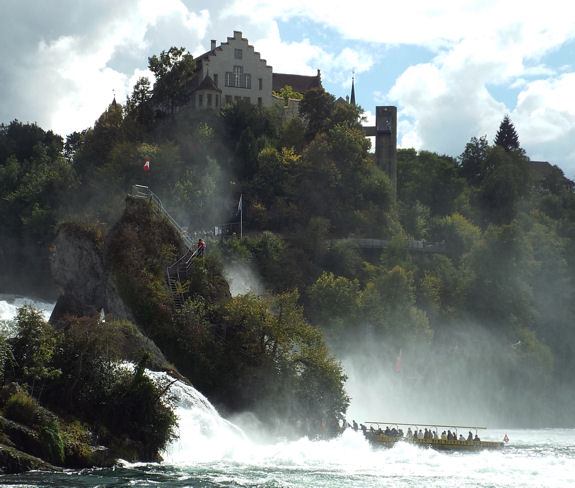 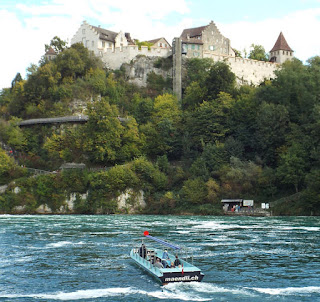 The falls are overlooked by a castle, Schloß Laufen.

During their operating season, the boats also provide a ferry service across the Rhine to the castle. 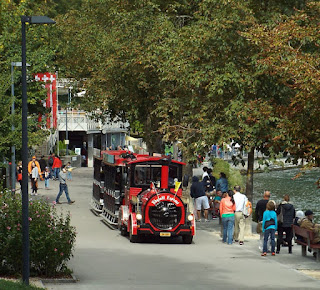 There is also a seasonal road train, Rhyfall-Express, operating at the falls from spring until autumn.

On Sundays, and daily during July and August, the road train runs regularly between Neuhausen and the falls.

A second road train operates into the centre of Schaffhausen four times a day.  This route generally runs daily. 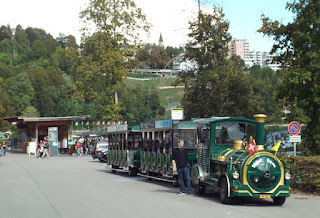 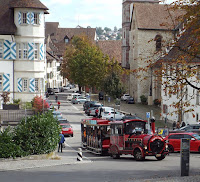 Images in this post were taken in September 2015.
No comments: