The city of Basel is the third largest in Switzerland.  200,000 people live in the city itself, but that number rises to half a million if you include the surrounding communities which make up the Basel metropolitan area.

Basel lies in the north-western corner of the country, very close to the borders with both Germany and France.  In fact, some of the communities which make up the Basel metropolis are in France or Germany rather than Switzerland. 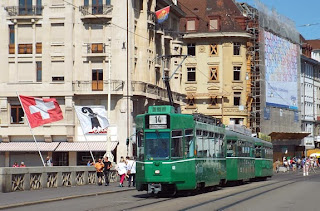 Basler Vehrkehrs-Betriebe (BVB), owned by the Basel canton government, operates a network of tram lines which radiate out from the city centre. 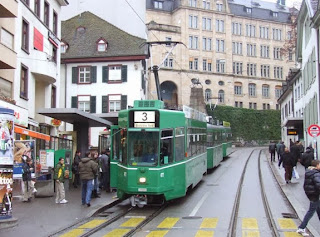 The oldest trams date from the late 1960s.  These were still in front-line service alongside newer vehicles when I visited Basel in August 2013. 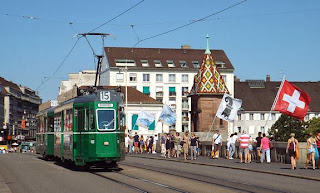 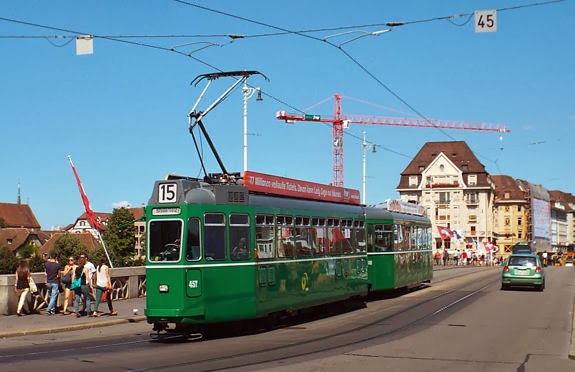 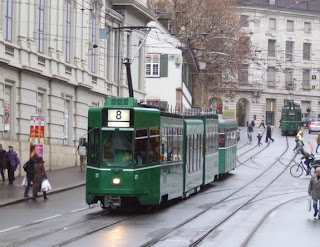 More recent additions to the tram fleet have been articulated vehicles which provide low-floor access. 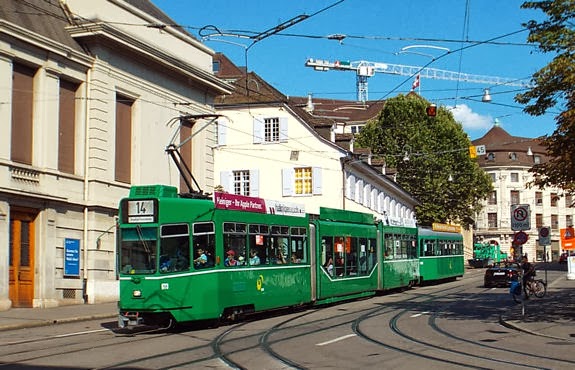 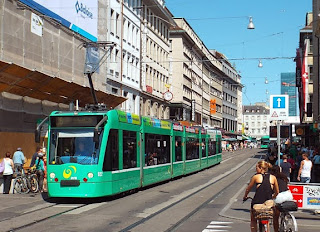 The latest trams are low-floor throughout, and wear a lighter shade of green. 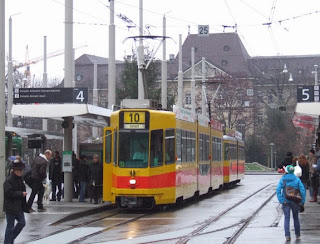 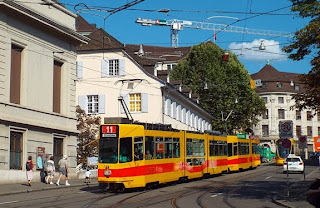 All the BLT trams I saw either had a low-floor section or were low-floor throughout, providing step-free access. 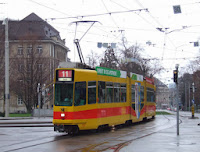 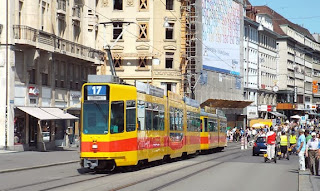 BLT's lines 10 and 11 provide a regular service throughout the day.  They are joined at certain times of day by route 17. 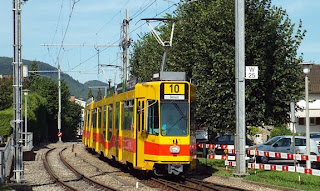 Beyond the city centre, some of BLT's routes were previously suburban light rail lines. 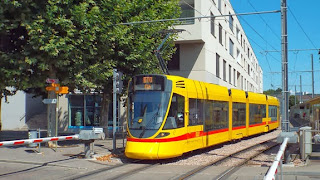 At some places where the trams cross roads, there are level crossings with barriers. 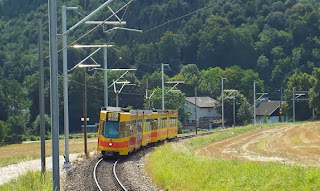 This image shows a tram in the French countryside.

Yes, it's in France, not Switzerland.   There are very few places in the world where a tram crosses a national border.  BLT's line 10 manages this twice at its outermost extremity, crossing from Switzerland to France, then back into Switzerland.

Just before the border is the station at Flüh.  Part of the service on line 10 terminates here rather than crossing into France. 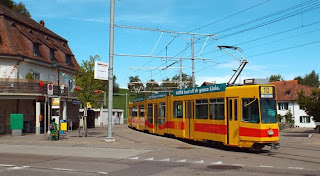 The border lies immediately beyond Flüh.  The tram route runs alongside a road at this point, handily providing a sign denoting the French border. 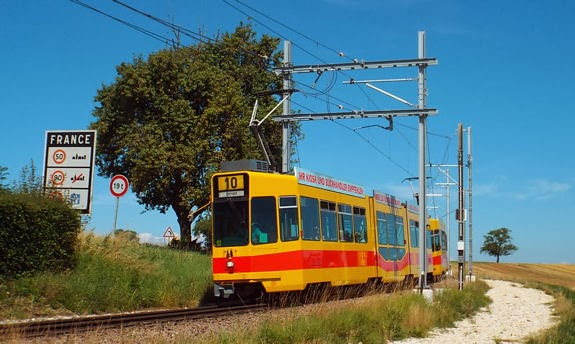 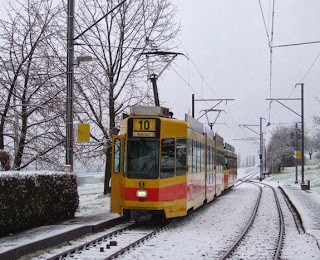 The trams make one stop in France, at Leymen.  Since Switzerland is outside the European Customs Union, the Leymen tram stop is technically a border customs point.

Beyond Leymen, line 10 re-enters Switzerland to reach its terminus at Rodersdorf.

Complementing the tram services, buses in and around Basel are provided by several operators.  BVB operates several routes into and across the city centre. 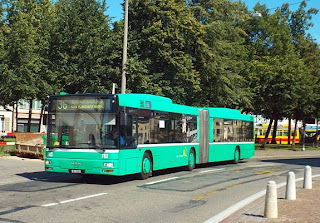 Some are operated using articulated buses. 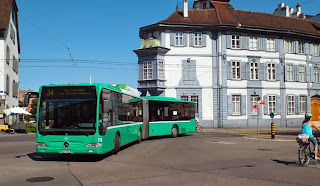 A number of the articulated buses are gas-powered. 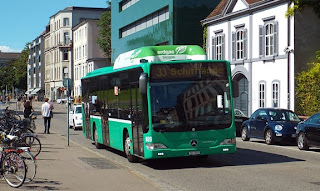 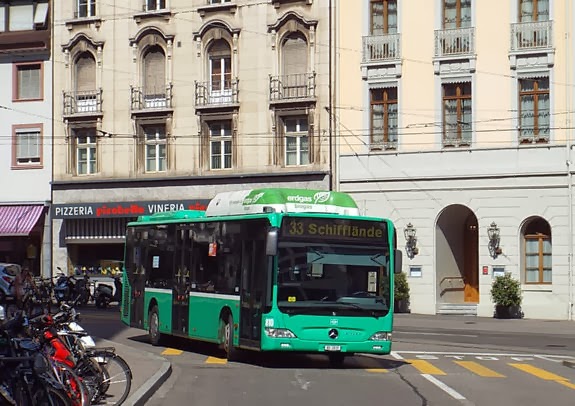 Autobus AG Liestal (website in German only) operate services into the city from Liestal, to the south-east of Basel.

I found articulated buses being used on these services. 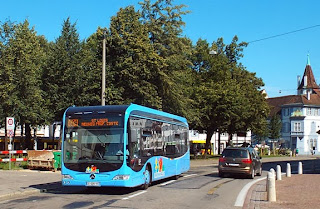 A couple of local services operate into the centre of Basel from St. Louis, across the border in France.  These are provided by Distribus (website only in French).

Buses from a German operator also reach Basel.  However they keep to the north bank of the Rhine and do not serve the city centre. 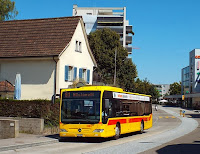 Like BVB, BLT operate buses as well as trams.  BLT's buses operate mostly on local services in the suburbs which connect into the tram and suburban rail networks, rather than directly into the city centre. 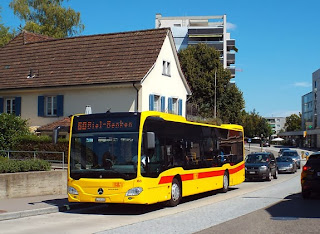 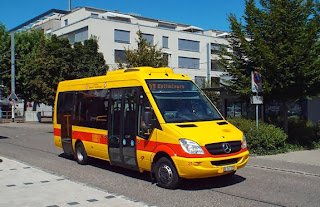 As well as standard single-deckers, BLT's bus fleet includes articulated buses.  At the opposite end of the scale, they also operate minibuses. 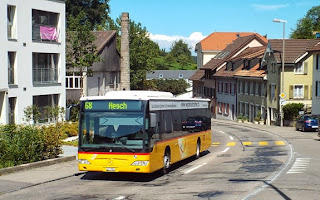 On the outer extremities of Basel's network, the Swiss PostBus system provide a small number of services.

This image was taken at Flüh, where the Postbus services connect with BLT's tram line 10 to the centre of Basel.
Unlike many of Switzerland's larger cities, there are no trolleybuses in Basel.  That hasn't always been the case - BVB operated trolleybuses until 2008, when they were replaced by gas-powered buses.

With the exception of Distribus, a unified tariff system applies to the bus, tram and railway services in Basel and the surrounding region.  This is administered by Tarifverbund Nordwestschweiz (TNW).  Fares are based on a zonal system.  I found that ticket machines accept payment in Euro as well as in Swiss Francs.  This is not surprising, bearing in mind how close Basel is to the French and German borders.  As in most of the places I have visited outside the UK, a single fare allows a passenger to interchange if necessary within a specified time limit.

Guests staying at hotels in Basel receive complimentary public transport tickets valid in TNW's central and inner Basel zones for the duration of their stay.  I have seen (and enjoyed!) a similar arrangement when staying in Geneva.

Distribus have a separate tariff system, which also allows interchanging between its services on a single fare.  Some through fares between the Distribus and TNW systems are available as are fares from the neighbouring German tariff system.  These are promoted as TriRegio (website in French and German only).  As well as single tickets, TriRegio day tickets are available, allowing 24 hours' unlimited travel on the networks of Switzerland's TNW, France's Distribus and Germany's RVL (Regio Verkehrsbund Lörrach - website in German only) as well as on the French railway line from Basel to and From Mulhouse. 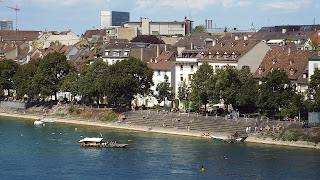 To complete the picture of Basel, passenger ferries (website in German only) shuttle across the Rhine.  The boats are not motorised - they are kept on course by an overhead guide cable, while the rudder uses the force of the river to power the boats across.

As the image below shows, swimming in the river is a popular pastime in Basel on warm summer days. 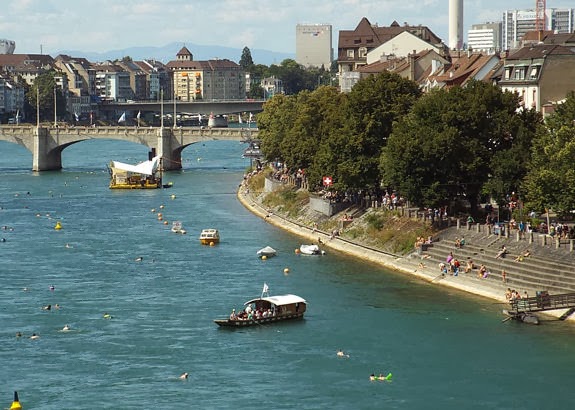