The seat of the Dutch government is Den Haag (The Hague).  However the constitutional capital of the Netherlands is Amsterdam, the country's largest city.  The public transport system within Amsterdam is operated by GVB, under a concession agreement with the city government. 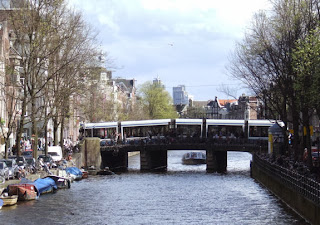 The historic centre of Amsterdam, popular with tourists, is built around a network of canals.

Trams are the most visible form of public transport in the streets of central Amsterdam. 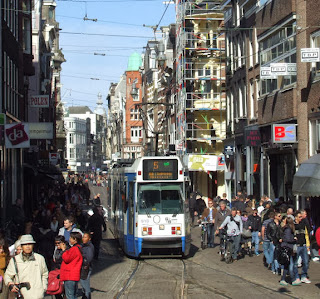 Leidsestraat, through the heart of Amsterdam, is narrow.  Along this street trams on lines 1, 2 and 5 operate on interlaced track, mingling with pedestrians. 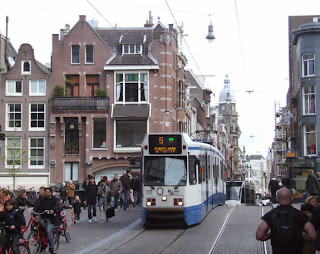 The canal bridges on Leidsestraat are wide enough to allow double track.  These act as passing loops in between interlaced sections of track. 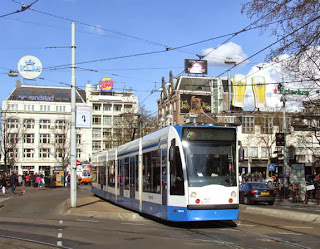 At its south end, Leidsestraat opens out into Leidesplein, one of Amsterdam's hubs for nightlife and entertainment. 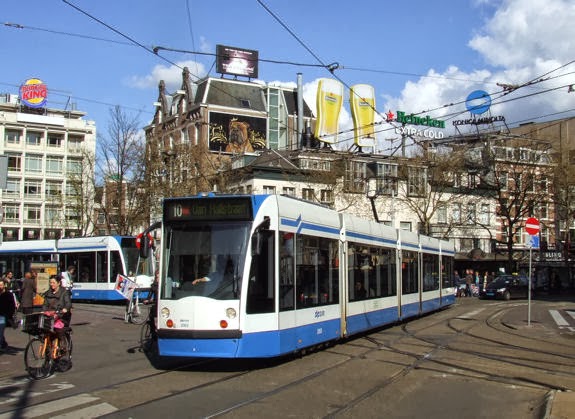 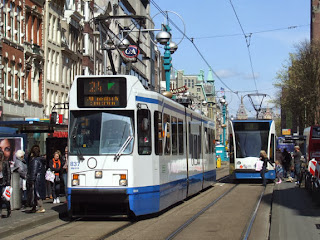 Most of Amsterdam's tram fleet is built to operate in one direction.  They have doors on one side only, and the tram termini incorporate loops. 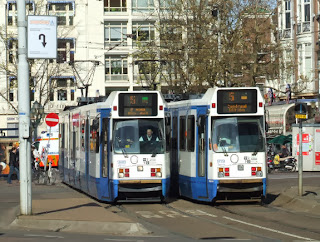 Line 5 is different.  Its suburban terminus at Binnenhof does not have a loop.  Its trams are therefore reversible, with doors on both sides. 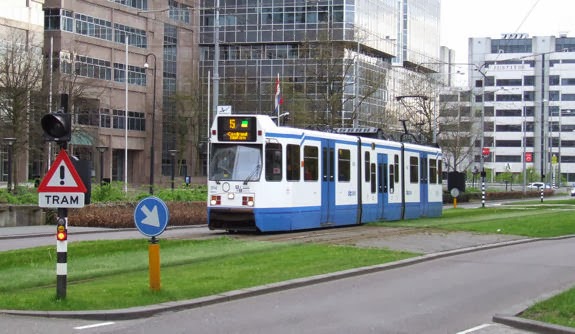 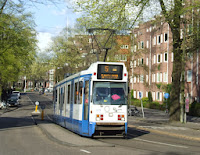 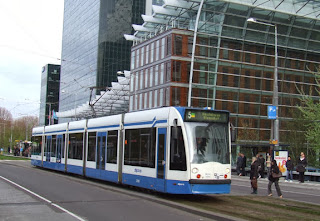 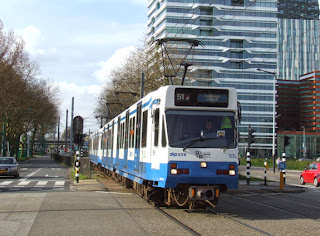 As well as trams and suburban rail services, Amsterdam also has a Metro.  The first Metro lines, numbered 53 and 54, opened in 1977.  They were joined by a third line, the 51, in 1990.  The original lines (and the more recently-introduced line 50) operate entirely on segregated railway infrastructure.  South of Amsterdam Zuid the 51 runs on-street, using the same tracks as tram line 5.

The trams on line 5 are built to serve on-street tram stops.  The newer trams are low-floor throughout, the older vehicles are step-entrance with a low-floor section.  The tram-train vehicles used on line 51 are high-floor, as they serve Metro station platforms. The shared stops are designed to handle both types. 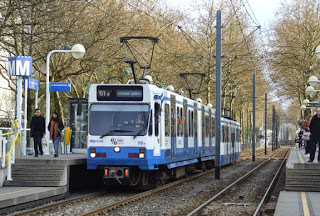 In this image, a line 51 tram-train serves the high-level platform.  Behind it is a line 5 tram waiting to draw forward to the low-level platform in the foreground. 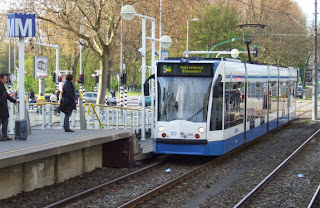 In this image, meanwhile, a line 5 tram has stopped at a low-level platform.

During the night, the tram and Metro systems close.  A network on night bus routes radiates out from the city into the suburbs. 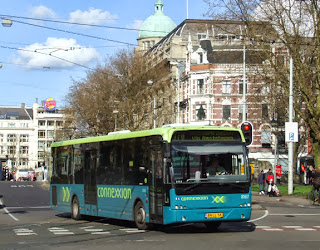 By day, only a small number of bus routes reach the city centre.  Most are regional services extending out beyond the city boundary.

Many of these services are operated by Connexxion (website in Dutch only) such as this one, photographed close to Leidseplein.

A small number of services from north of the are operated by EBS (website in Dutch only), these terminate at Amsterdam Centraal station.

Buses are more numerous in the suburbs, where they feed into the tram, Metro and suburban rail network.  The following images were taken at and around Amsterdam Zuid (Amsterdam South), which is developing into Amsterdam's business and commercial district as well as a major transport hub. 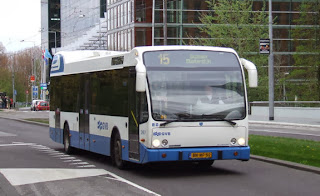 GVB's daytime bus services generally operate in the suburbs rather than in to the city centre.  A couple of routes serve Amsterdam Zuid.  Conventional single-deck and articulated buses are used. 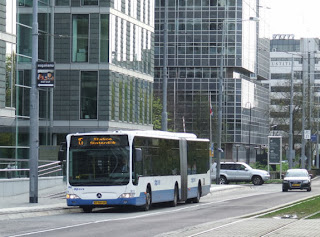 Other routes which converge on Amsterdam Zuid are regional services provided by Connexxion (website in Dutch only). 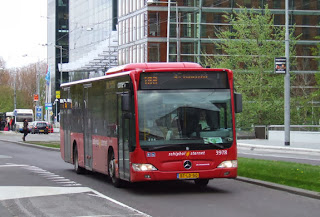 Some are operated with conventional single-deck buses.  The Schiphol Sternet branding applies to a network of routes serving Amsterdam's airport at Schiphol. 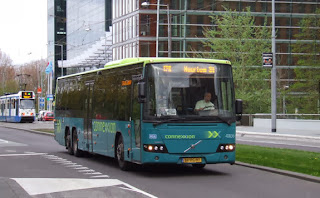 Whereas the buses I found on the Schiphol Sternet service had two axles and three doors, I also found buses with three axles and two doors.  These were operating a service to Haarlem. 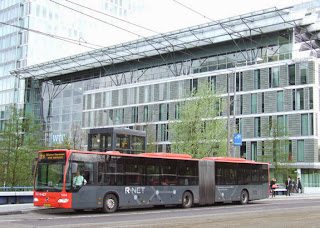 While some routes were using conventional single-deck buses, others were operating with articulated vehicles.

R-Net is another brand used for a couple of routes operated by Connexxion.


All ticketing on the Amsterdam public transport network involves the OV-Chipkaart smartcard, which can be used on public transport throughout the Netherlands.  Single fares using "pay-as-you-go" credit are charged by the kilometre travelled, plus a flat fee.  At the time of writing, the rates on GVB services are €0.86 flat fee and €0.14½ per kilometre (rounded to the nearest cent).  So, for example, a 1-kilometre journey costs €1.01.  Interchange without paying another flat fee is allowed within 35 minutes of the first use.  This allows interchange between bus, tram and metro services (including services provided by different companies) but does not usually allow interchange between these modes and rail services.

Fares can also be paid in cash on board buses and trams but, for single journeys, this is a flat fare of €2.80 (at 2013 prices).  It is valid for one hour and transfer within that hour, but only onto other GVB services.  It cannot be used for transfer onto buses operated by Connexxion or EBS.  A 24-hour ticket can also be bought on board buses and trams.  At the time of writing this costs €7.50 and, like the one hour ticket, it is valid only on services operated by GVB.  The one hour and 24 hour tickets are single-use disposable OV-Chipkaarts.

Sightseeing tours of Amsterdam operate, with a choice of double-deck bus or American school bus. 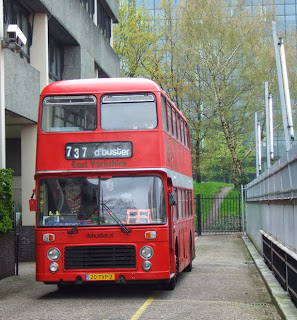 As in most of the places I have visited outside the UK, double-deckers are not used on local bus services.

I did, however, find one double-decker when I visted Amsterdam in April 2012.  The bus is from the UK but is now in private use in the Netherlands, converted into a catering vehicle.