Cable cars have historically been associated with mountains and ski resorts.  Yet they can be found in a number of cities - Koblenz is the ninth on this blog. 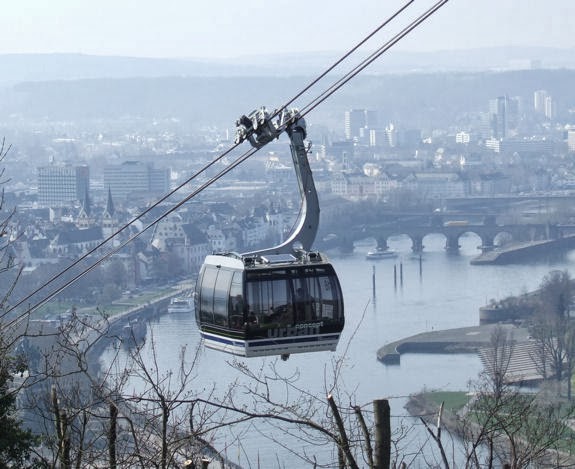 Koblenz is located at the confluence of the Rhine and Moselle rivers, at the northern end of the Upper Middle Rhine Valley, a UNESCO World Heritage Site.  Across the Rhine, perched high on a hill, is the fortress of Ehrenbreitstein.

In 2011, Koblenz hosted Germany's National Garden Show.  The grounds of Ehrenbreitstein formed one of the venues of the show.  The cable car was installed to transport visitors from the city centre to Ehrenbreitstein. 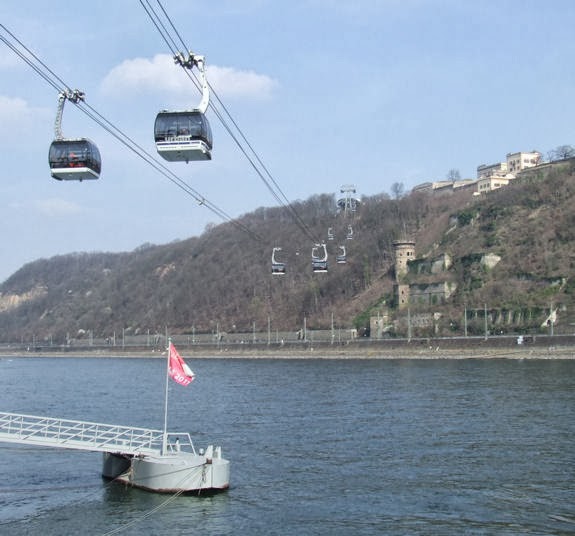 The cable car operates daily, all year round, from 10:00 until 17:00 (winter) or 18:00 (summer), these being the hours that Ehrenbreitstein fortress is open to visitors. 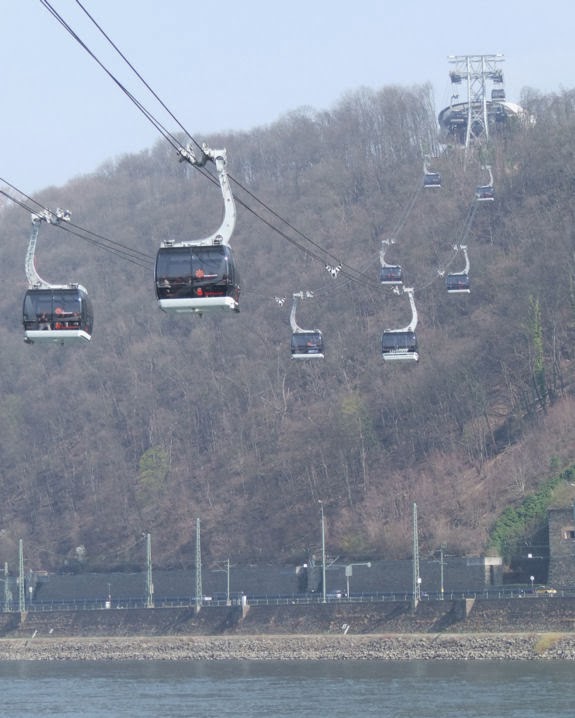 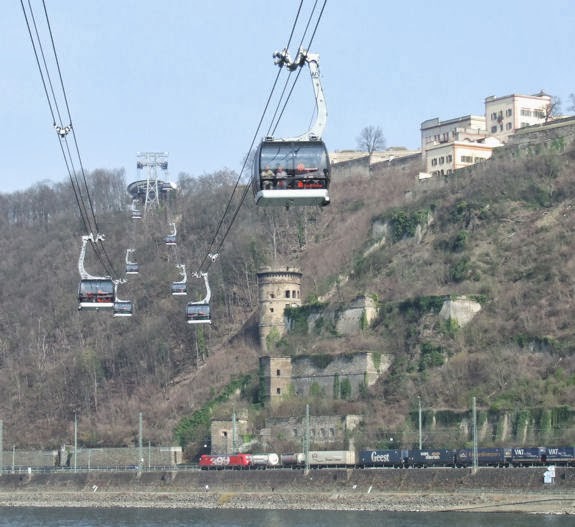 Can the cable car be considered part of Koblenz' public transport system?  Not really, in my opinion.  It is clearly there for tourists, both as a link to an attraction and as an attraction in its own right.  The cable car has its own tariffs, not connected with those of the public transport network which serves Koblenz and the surrounding region.

The public transport network in and around Koblenz is co-ordinated by the regional transport association, Verkehrsverbund Rhein-Mosel (VRM). 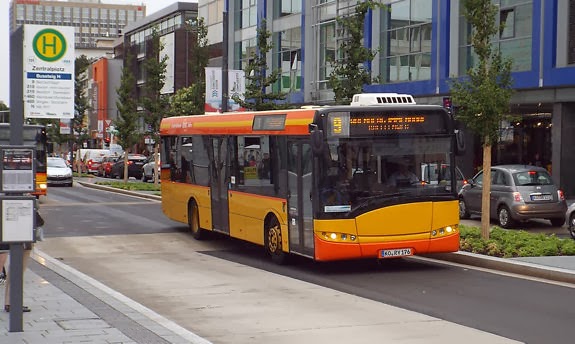 There are no trams now in Koblenz.  There had been a tram system, but it closed in the 1960s.  Local transport services within the city are provided by buses.

Many of the city's local bus routes are provided by KEVAG (website in German only), Koblenz' municipal undertaking.  KEVAG's buses carry a yellow and orange colour scheme. 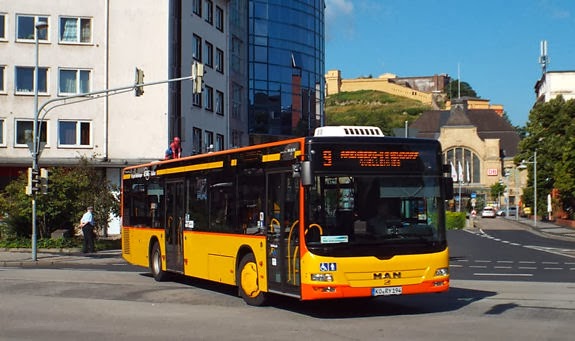 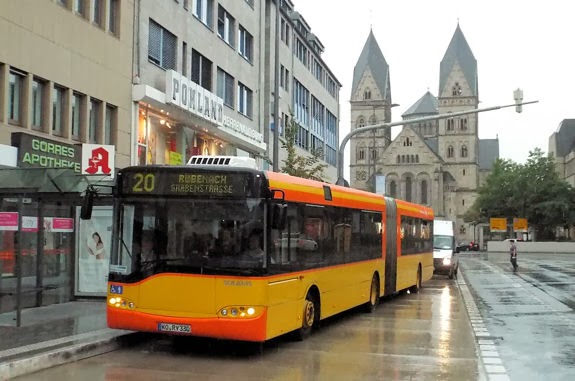 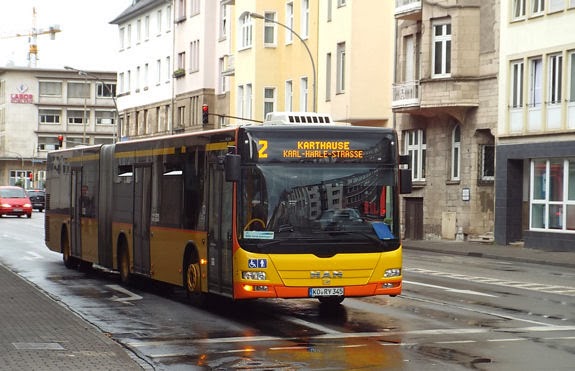 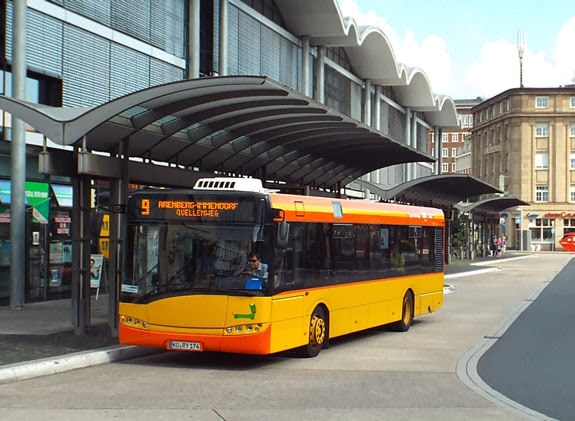 Some, but not all, of the city's bus routes serve an interchange in front of Koblenz' main railway station, Koblenz Hauptbahnhof, a kilometre or so to the south of the city centre. 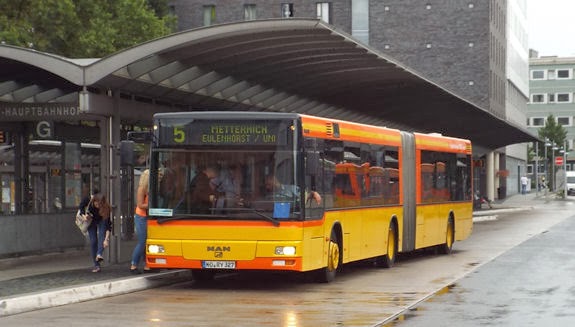 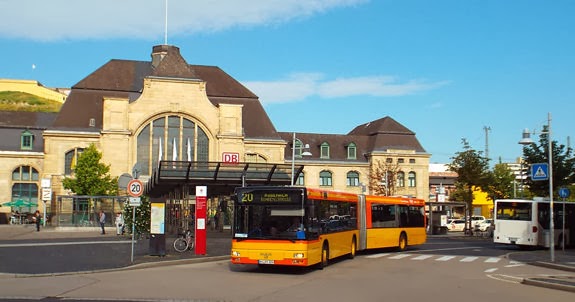 Not all of the local city services are operated by KEVAG.  When I visited in August 2013, I found a couple of other operators' buses on local routes. 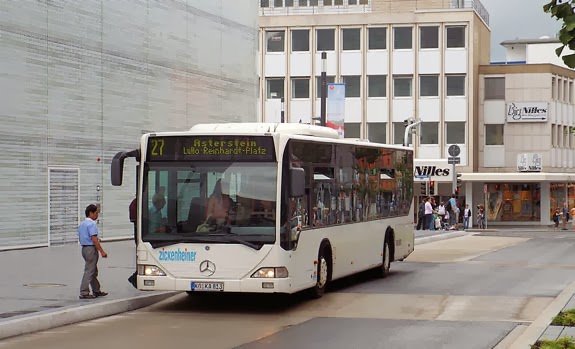 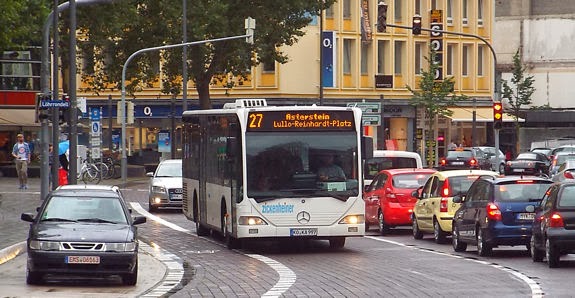 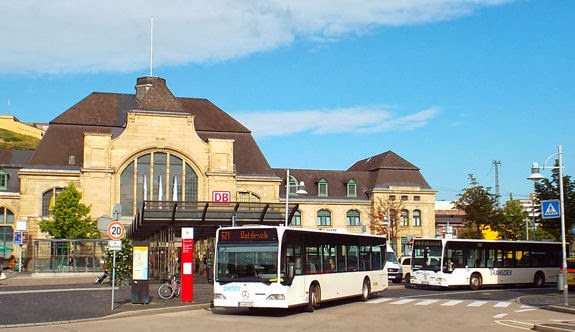 Longer-distance bus routes from Koblenz to the surrounding region operate from the interchange outside the rail station.

These services are operated by a variety of companies.  Some services carry DeutscheBahn (German Railways) Rhein-Mosel-Bus branding (website in German only). 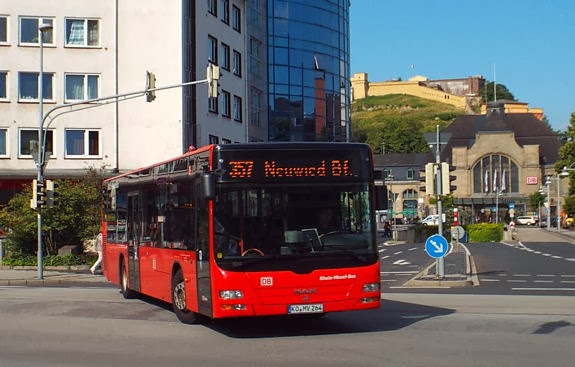 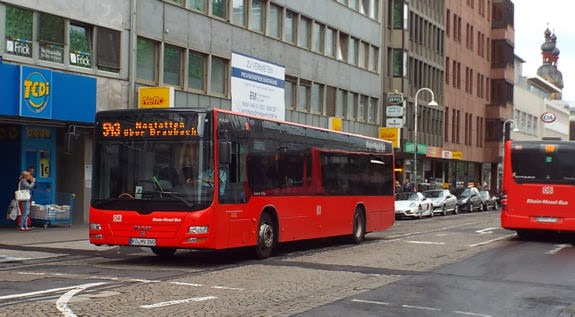 Although the terminus and interchange point is at the railway station, many of these services also pass through the centre of Koblenz. 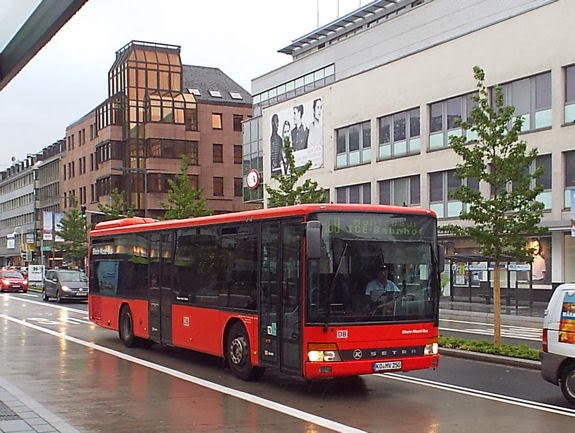 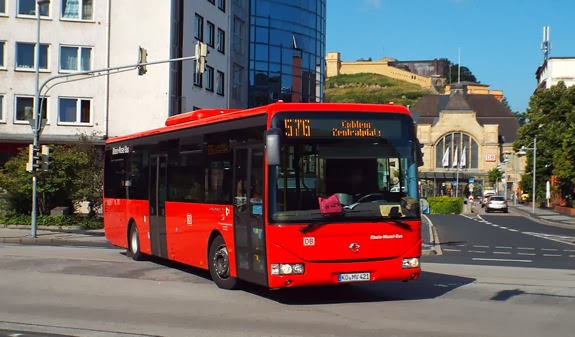 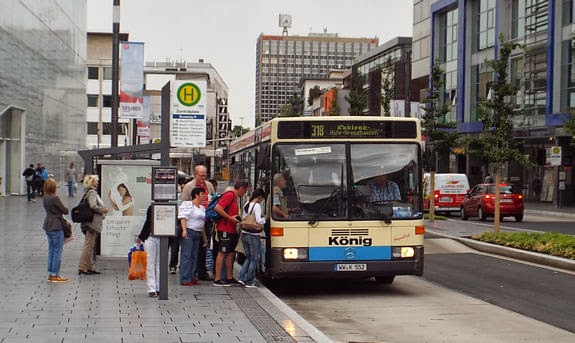 Even in 2013, step-floor buses such as this one could still be found operating into Koblenz. 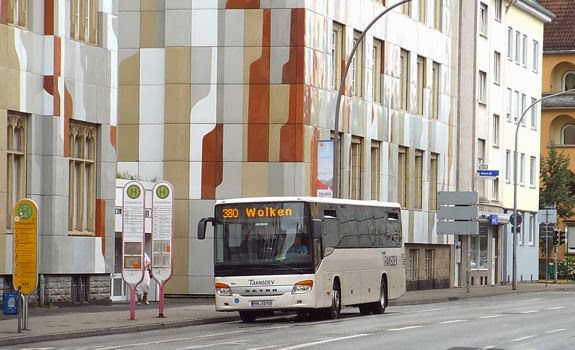 As well as standard buses, coach-type vehicles operate on some services. 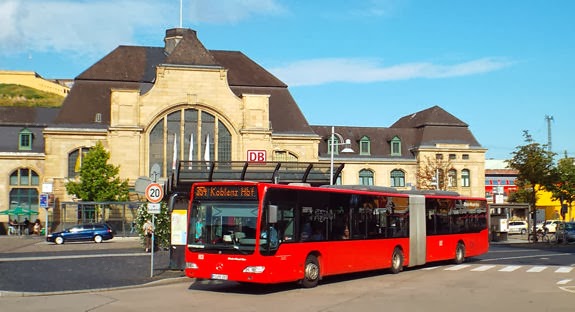 Articulated buses operate on some of the longer-distance routes. 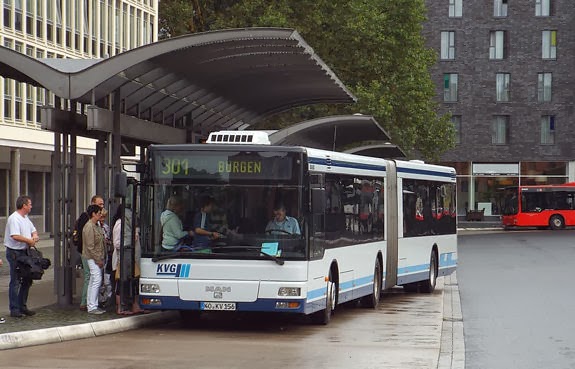 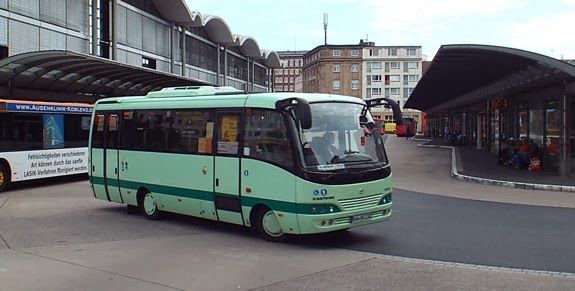 Constrasting with the articulated vehicles, I also found a minibus.  Even this small vehicle has two doors.

Fares on Koblenz' bus services are based on a zonal tariff system, which applies right across the Rhein-Mosel region.  The fare paid depends on how many zones you travel through.  Transfers are permitted within a time limit (which varies according to the number of zones), and local trains are included in the tariff.  All-day tickets cost roughly twice the single fare but, for groups of 2 to 5 people travelling together, a group day ticket is less than twice the cost of individual day tickets.

A smartcard can be used to pay for single fares.  Using a smartcard is around 20% cheaper than buying single tickets with cash.

Full information about fares and tickets can be found on VRM's website. 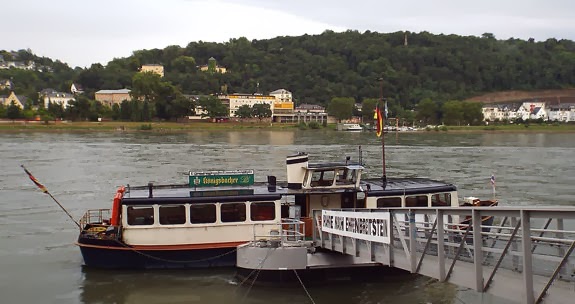 Although a number of the bus routes cross the Rhine, there is also a ferry crossing to Ehrenbreitstein.  This has its own tariffs, but does accept VRM tickets.

Other passenger vessels of various sizes sail from Koblenz along the Upper Middle Rhine Valley.  Some operate as scheduled stopping services, calling in at other towns along the river, while others provide round-trip cruises. 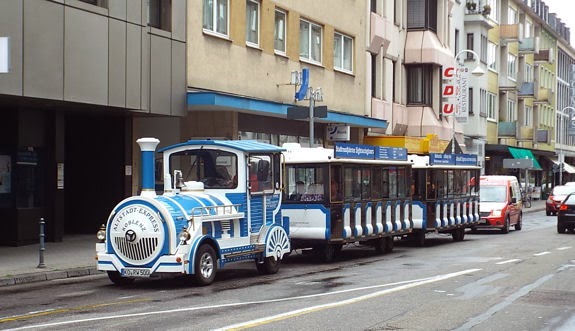 Finally, for tourists wanting a tour of Koblenz itself, this road train (website in German only) operates from April to October.