Pharmaceutical company Bayer AG celebrates its 150th anniversary this year.  It was on 1st August 1863 that the company was founded, in what is now the city of Wuppertal. 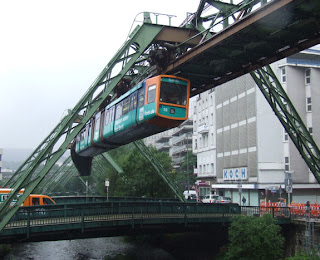 Wuppertal is one of the industrial cities which make up Germany's Rhine-Ruhr region.  Created in the 1929 by merging neighbouring towns of Barmen and Elberfeld with surrounding settlements, Wuppertal is home to around 350,000 people - and a particularly unusual form of transport.

At the end of the 19th Century, the region was growing and needed a mass transit system.  The geography of the area, in a narrow valley which was prone to flooding, presented an awkward challenge.  The solution was a 13-kilometre hanging monorail which opened in 1901. 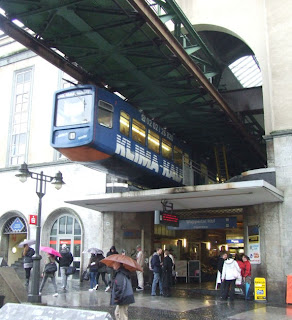 The monorail is a single route operating across the city from Oberbarmen in the east to Vohwinkel in the west.  For much of its length, it glides along above the River Wupper ("Wuppertal" translates, literally, to "Wupper valley").  At its western end, the monorail runs above streets.

Although it has undeniably become a tourist attraction, the monorail is a key element in Wuppertal's transport system with cars operating every few minutes through most of the day.  It is operated by the city's municipal undertaking, Wuppertaler Stadtwerke (WSW - website in German only). 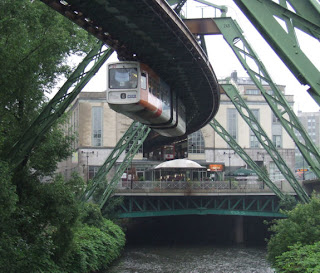 When I visited Wuppertal in June 2013, all of the monorail cars I saw were carrying commercial advertising liveries. 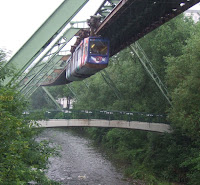 There are official and unofficial websites for the monorail, while Wuppertal's official website also gives information about the system.  The write-up on the Environmental Graffiti website is worth a read as well. 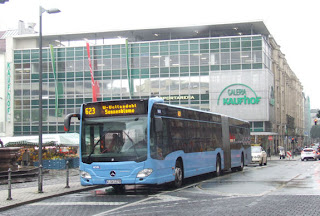 Wuppertal used to have trams, but the last ones ran in 1987.  Today, the monorail is complemented by an extensive network of bus services.   Of the buses I saw in the centre of Wuppertal, many were operated by WSW.  The majority were three-door articulated vehicles. 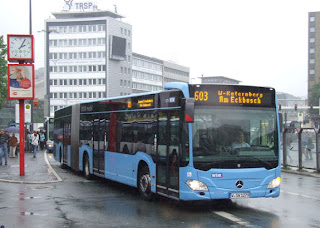 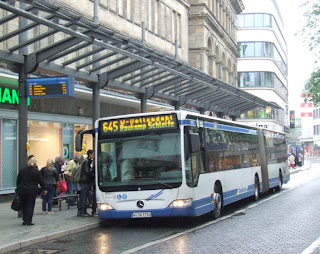 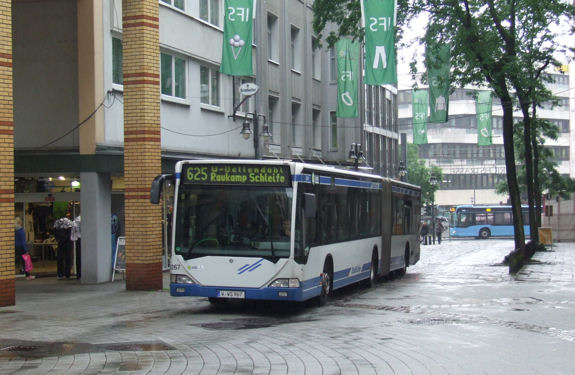 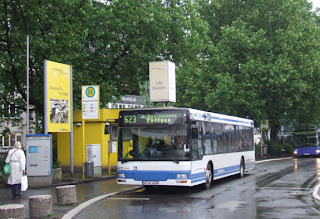 Some standard, two-door single-deckers also operate into the centre of Wuppertal. 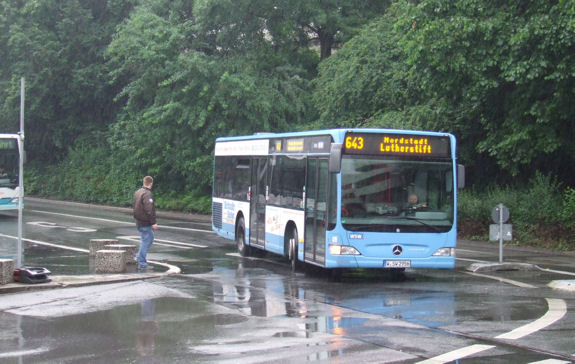 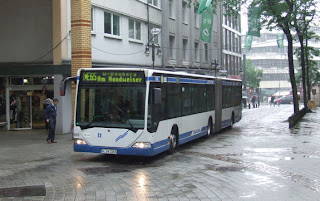 Three "CityExpress" routes CE62, CE64 and CE65 operate from Wuppertal to districts which are remote from the monorail and suburban rail systems.  These services are limited-stop and generally operate every 20 minutes.

There is a fourth "CityExpress" route, CE61,  but it does not reach the city centre. 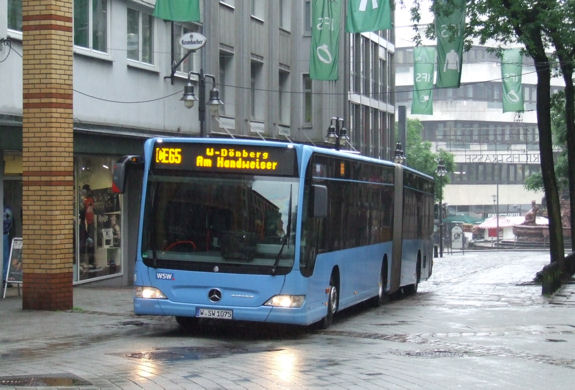 The choice of route numbers for the "City Express" services follows on from the monorail, which is shown on maps and timetables as line 60.  Continuing the sequence are four "SchnellBus" routes SB66, SB67, SB68 and SB69.  Like the CityExpress services, these are limited stop.  They generally operate hourly, linking Wuppertal with neighbouring towns not served by the rail network. 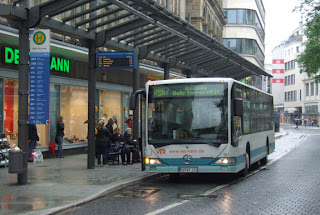 The SchnellBus services bring other operators' buses into the centre of Wuppertal.

This standard single-decker is operated by Verkehrsgesellschaft Ennepe Ruhr (VER - website in German), based in the neighbouring rural district of Ennepe-Ruhr-Kreis. 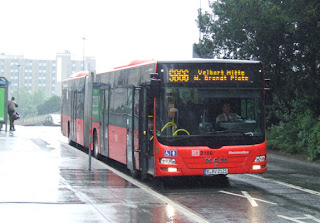 This articulated bus is operated under the Rheinlandbus brand of DeutscheBahn, the German Federal railway operator (website in German only).

The SB66 runs to Velbert.  There it changes number to SB19, to run into the city of Essen.

Wuppertal's transport system is co-ordinated by the Vehrkehrsverbund Rhein-Ruhr (VRR), which covers the whole of the Rhine-Ruhr region encompassing cities such as Dortmund, Düsseldorf, Duisburg and Essen amongst others.

Fares are priced on a zonal basis throughout the VRR area.  Tickets are valid on bus and rail services (and on trams, in those cities which have them), and single journey tickets permit interchange within a stated time.  More information is available from the VRR website.

Since the tariff system does permits interchange at no extra cost, a number of suburban bus routes operate as feeders to the monorail, CityExpress, SchnellBus and local rail services at interchange hubs in Wuppertal's suburbs.

Some of the more outlying parts of Wuppertal are served by taxi-buses or demand-responsive bus and taxi services (in some cases charging special fares outside the VRR tariff system).  Meanwhile trolleybuses from the neighbouring town of Solingen connect with the monorail at its western terminus, Vohwinkel.  I didn't have time to track these down during my very brief visit to Wuppertal in June 2013.