The city of Strasbourg is situated in France's Alsace region.  It is the official seat of the European Parliament, although much of the European Union's business is done in Brussels.  The River Rhine, which flows to the east of Strasbourg, forms the border between France and Germany.  Strasbourg was itself annexed by Germany in 1870 until the end of the First World War, and occupied again by Germany during World War 2. 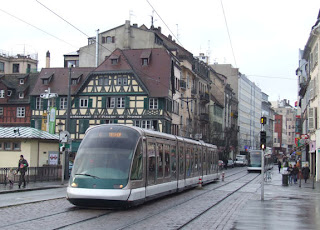 Like many cities, Strasbourg developed a tram system in the 19th Century, but later abandoned it.  Strasbourg's last tram ran in 1960.  By the 1980s, however, the growth in motor traffic was causing congestion and pollution problems in the city centre.  Trams returned, with the first section of a new system opening in 1994. 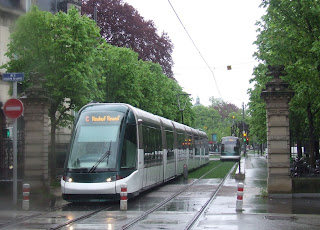 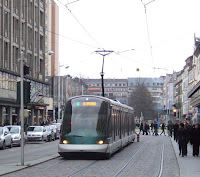 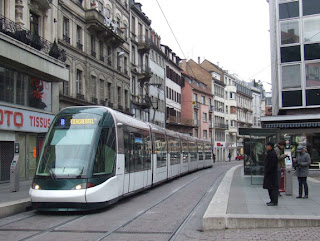 To cater for motorists visiting Strasbourg from further afield, a number of Park & Ride sites have been built at tram stops away from the centre.

Since its inauguration, the new system has expanded and now comprises 6 lines.  Five lines meet at the Homme de Fer stop, where the image below was taken. 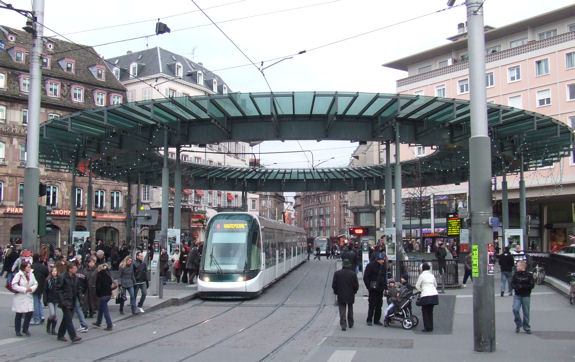 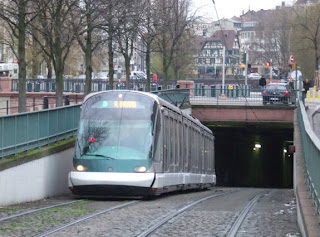 A short section of the tram system runs in tunnel.  This takes trams beneath Strasbourg's railway station.  There is a tram stop underground at the station while more recently, another line has been extended to an above-ground terminus outside the station. 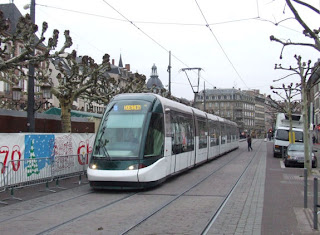 Each December, Strasbourg is home a large Christmas market attracting large numbers of visitors.  In this image, one of the newer trams is passing one of the market sites. 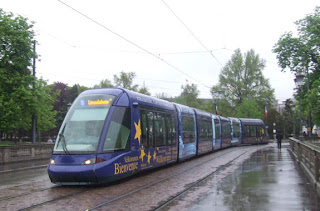 Although most of the trams carry fleet livery of white, green and beige, at least one wears this blue-based scheme proclaiming Strasbourg's status as "European capital".

Further extensions to the tram system are planned, including one which will take trams across the Rhine into Germany.

Strasbourg's tram network is complemented by a number of bus routes.  Some are operated by standard, two-door single-deck buses: 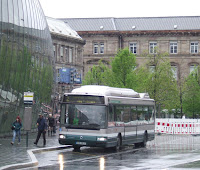 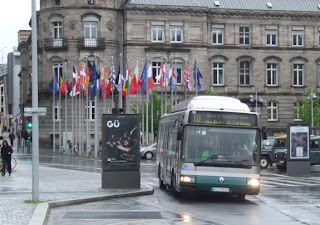 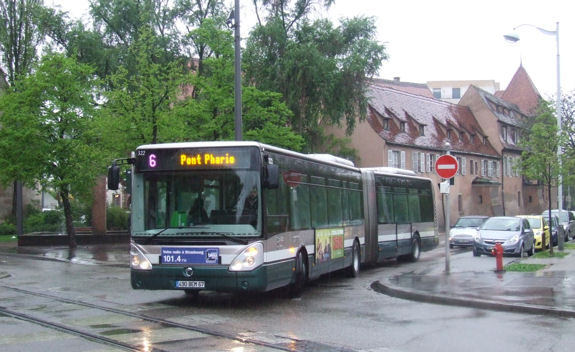 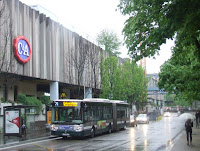 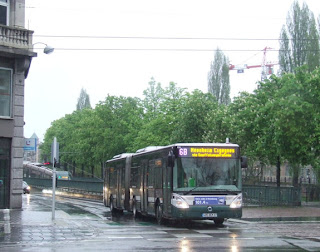 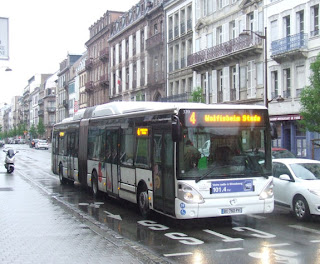 The newest buses, which are fuelled by compressed natural gas, carry a white-based livery: 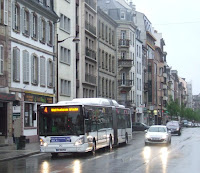 Further bus routes operate in suburban areas, connecting with tram services at designated interchange points.  One of these routes extends to the town of Kehl, on the other side of the Rhine and thus in Germany.  A single fare system applies, with single (and return) tickets permitting interchange where necessary.  Single-journey tickets can be bought in packs of 10 or 30 at a discount, as well as individually.  There is also a 24-hour ticket (valid for 24 hours from the time it is first validated).  A "24h Trio" ticket, valid for 24 hours for up to 3 people travelling together is partcularly good value - at the time of writing, this costs just €5.70. 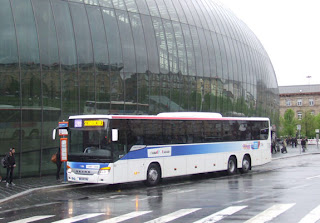 Bus services into Strasbourg from the surrounding region are provided by Compagnie des Transports du Bas-Rhin (CTBR), website in French only.  These operate under the "Réseau67" (Network67) banner, 67 being the number of the "département" covering this area.  CTBR is a joint venture established at the end of 2008, in which CTS is a majority partner.  The CTBR buses I found in Strasbourg were three-axle, two-door vehicles. 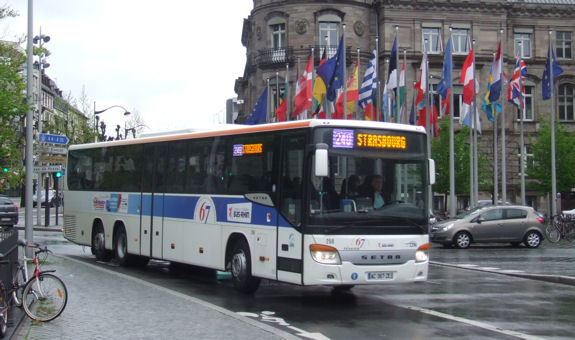 Fares on Réseau67 are very simple - at the time of writing, a single journey costs €2, irrespective of distance travelled.  A slightly higher fare of €2.70 allows transfer between CTBR buses and the Strasbourg city services provided by CTS. 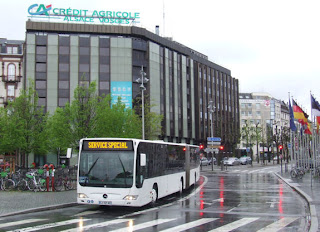 Finally, my most recent visit to Strasbourg, in April 2013, coincided with an event at the Zenith exhibition centre on the western edge of the city.  A shuttle bus was operating between the central station and Zenith, with articulated vehicles.