My previous post was about Jersey, the largest of the Channel Islands.  The second largest island, Guernsey, lies to the north of Jersey.  Guernsey is governed independently from Jersey. 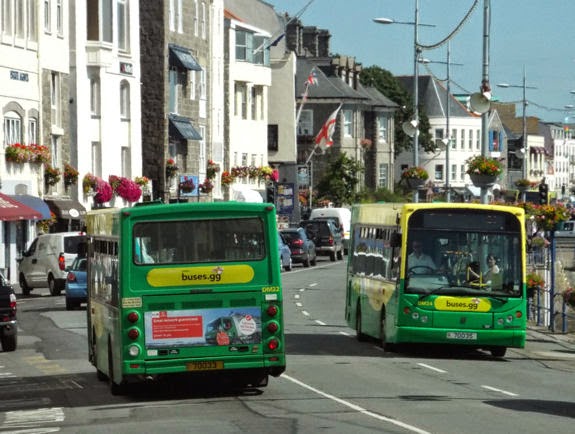 Since April 2012, Guernsey's bus network has been operated by CT Plus Guernsey under contract to the Guernsey government, the States of Guernsey.  As it happens, CT Plus also hold the contract to run Jersey's buses, trading as LibertyBus.

The buses are owned by the States of Guernsey and leased to the operator of the bus service contract.  All are single-deck, with a single set of doors. 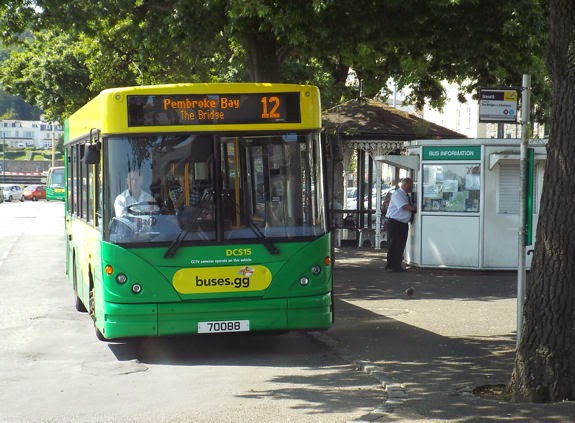 The main town on Guernsey is St. Peter Port.  The island's bus network radiates from a terminus on the harbourfront.

Routes 91 and 92 are named "Guernsey Vaeux".  They operate as circular services around the island, starting and finishing in St. Peter Port.  Route 91 runs clockwise, route 92 anticlockwise.

The images below were all taken in St. Peter Port. 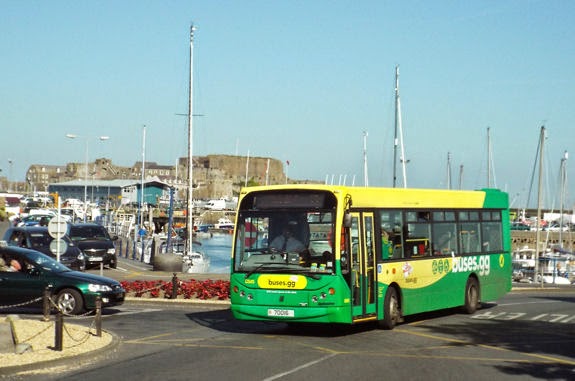 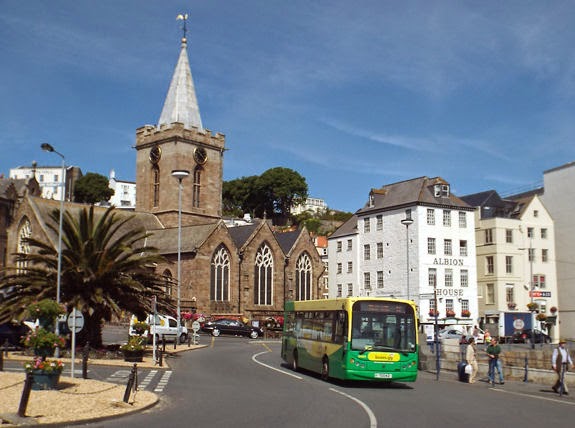 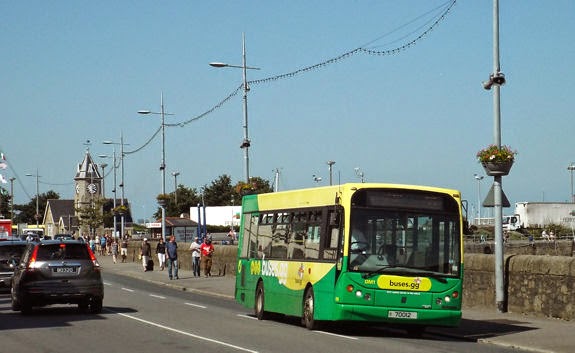 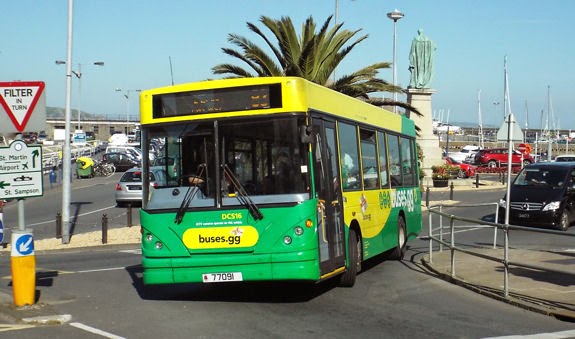 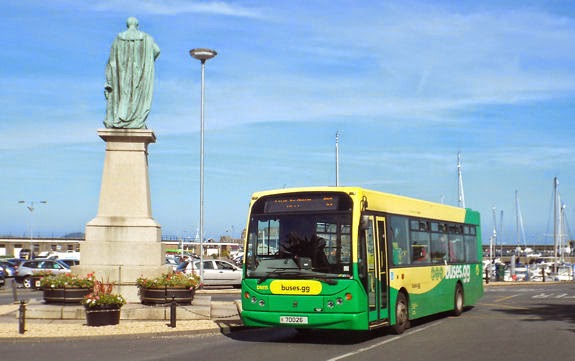 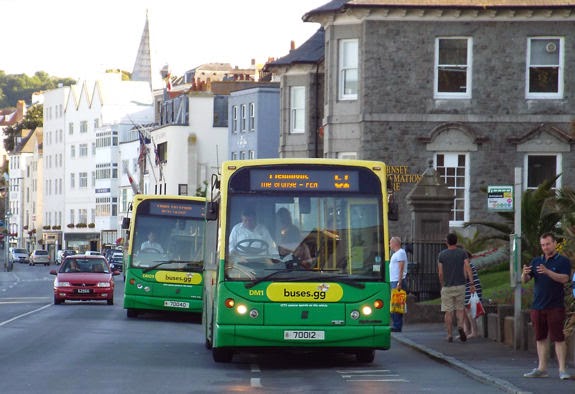 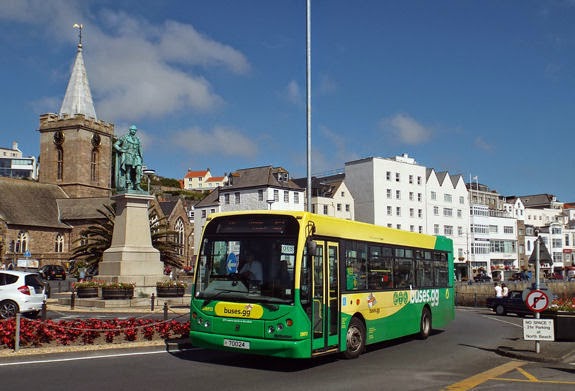 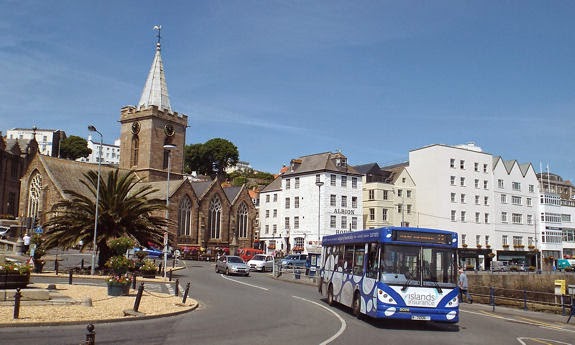 Although most buses carry a green and yellow fleet livery, a number are in advertising colours.

Fares on Guernsey's bus network are simple - a flat fare of £1 applies to all journeys, except on late evening services operating on Friday and Saturday evenings where a £2 fare applies.  Transfer tickets allow interchange where necessary, without paying a second fare.

Prior to June 2014, the £1 fare was available only to residents of Guernsey, with a £2 fare for visitors to the island.  The higher visitor fare was abolished, coincidentally, on the day I arrived on Guernsey.

Ferries from the harbour in St. Peter Port link Guernsey with the neighbouring islands of Herm and Sark. 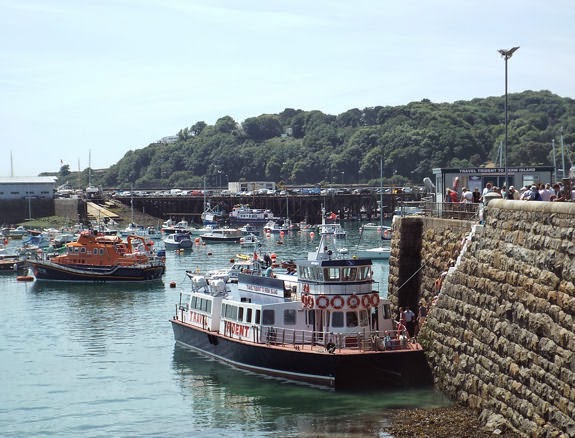 The short crossing between Guernsey and Herm is operated by Travel Trident. 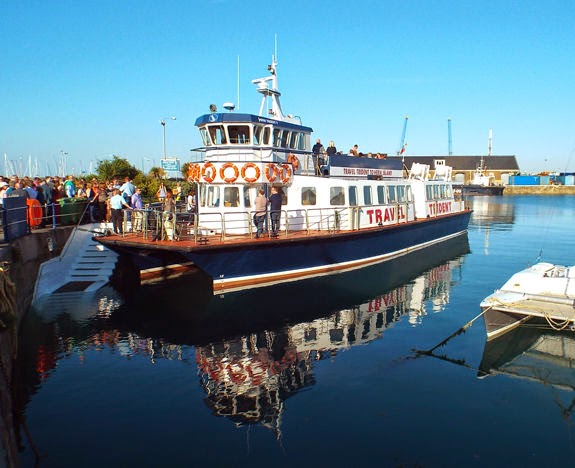 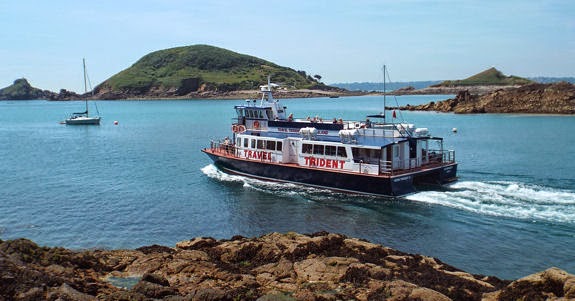 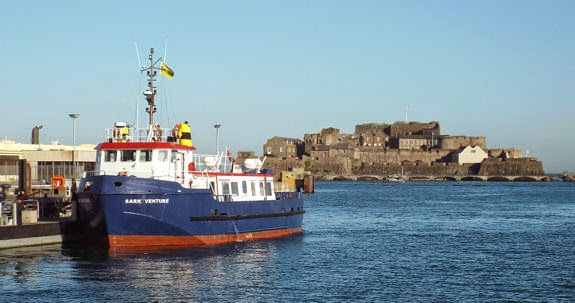 The crossing to Sark is provided by the Isle of Sark Shipping Company.

The main ferry link to Guernsey from England and France, as well as from Jersey, is provided by Condor Ferries.  These ferries operate all year round.

Fast catamarans are used on crossings to and from Poole and Weymouth on England's south coast, and between Guernsey and Jersey.

Traditional ships sail between Portsmouth and Guernsey, and provide the direct crossings from Guernsey to St. Malo on the French coast.  It is also possible to reach St. Malo by fast catamaran, by changing in Jersey. 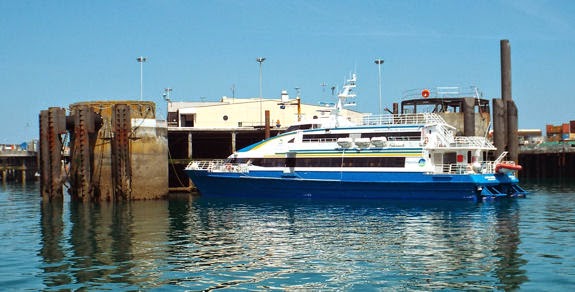 
Images in this post were taken during June 2014.  Guernsey's bus system will change in 2015.  A new contract to operate the island's bus services is due to start in April.  The operator of the new contract is likely to be required to replace the bus fleet with new vehicles.  The bus service is also expected to become free, in an attempt to tackle traffic congestion by tempting people out of their cars.

There will also be changes to Condor Ferries services, with the arrival of a new catamaran.  Weymouth's ferry terminal is unable to accommodate the new, larger vessel, therefore the Weymouth route will cease in Spring 2015.